Did you remember it was going to happen early Sunday morning? Except if you live in Arizona or Hawaii, that is.

Here’s a map that might help you envision things:

Whose idea was this anyway?

The idea of coordinating waking hours to daylight hours was a satirical concept first proposed in 1784 by Benjamin Franklin, who at the time was the editor of The Journal of Paris. Franklin made the suggestion that waking up earlier in the summer would economize on candle usage, thereby resulting in significant savings. 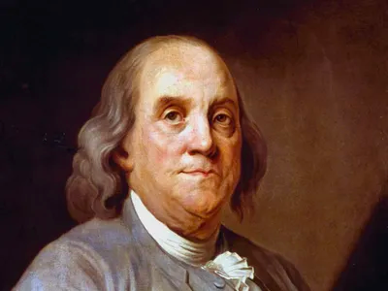 I grew up thinking that this was something created to somehow benefit farmers. I don’t know who told me that, but somebody did. It turns out that’s a common myth. In reality, farmers have been one of the strongest lobbying groups against DST since it began. The clock adjustments have a negative effect on farming schedules. The sun itself has an effect on certain natural things and conditions on a farm, so the time change adds extra, unnecessary challenges.

Daylight savings time was first implemented in the United States with the Standard Time Act 1918. It was a wartime measure enacted during World War I with a planned duration of seven months. The intention was to add more daylight hours to conserve energy resources. Year-round DST, then also known as “War Time” was implemented again during World War II. After the war ended, local areas were free to choose if and when to observe DST. Things remained that way until 1966 when the Uniform Time Act was standardized. Permanent daylight saving time was implemented in the winter of 1974. People complained about children going to school while it was still dark, and about working people commuting and starting their day in darkness during the winter months. The act was repealed a year later, and we went back to changing clocks twice a year.

I remember learning the motto as a little kid in elementary school: “spring forward” and “fall back”.

Are the change dates consistent?

No. The dates on which to change the clocks can also move for political or social reasons. The Uniform Time Act of 1966 formalized the United States period of daylight saving time observation as lasting six months, instead of being left to local areas to decide. The time period was extended to seven months in 1986 and then extended again to eight months in 2005. The time extension was partially brought about by the work of lobbyists from the candy industry; they wanted to increase profits by including Halloween (October 31) within the daylight saving time period, figuring that longer hours with daylight meant more trick-or-treater time.

Will this year be our last go-round with the changing of the clocks?

The United States Senate unanimously passed the Sunshine Protection Act in March 2022, but it hasn’t been voted on in the House of Representatives. If passed, the legislation would make daylight saving time permanent starting in 2023. Until the bill passes (if it ever happens) we will still be changing our clocks twice a year.

Supporters of this legislation say changes will benefit the economy by adding more “daytime” hours at the end of the day. They say that it will also help children to play outdoors later, reduce car accidents, and help people who suffer from seasonal depression. 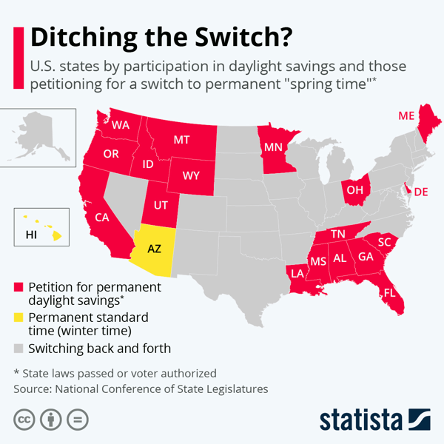 Your brain has a built-in, internal clock. It helps keep time each day, making sure the right things are happening at the right moments inside our bodies, such as cardiac functions, metabolic processes, hormone fluctuations and sleep. It also is what wakes you up on weekends earlier than you’d like to get up because your body knows the time you get up for work or school. Your body clock remembers.

For most people, though, that internal clock runs slightly longer than the 24-hour time period we consider a day. The sun helps by sending signals to specialized receptors in our eyes. Each morning, sunlight resets our internal clock by “pulling” us back into sync with the 24-hour day utilized by society. After the sun sets, our bodies produce hormones like melatonin, which promotes sleep.

Like morning sunlight can move your internal clock earlier, light from any source too late into Oh interfere with your ability to fall asleep. That’s one of the main reasons experts advise that you stay off electronic screens an hour before bed.

Physical effect of the time disruption

The springtime change to daylight saving time abruptly disrupts the relationship between our brains and the sun. Our internal clocks have evolved to align with the sunrise, the sunset, and the 24-hour day around which society is structured. When we switch to daylight saving time, our daily schedules shift an hour. Suddenly you’re waking up in the dark call thing work with sunlight still left in the day. in some ways it’s awesome, but at the same time, your body knows something doesn’t make sense. Sometimes people adjust in a day or two, for some people, just the clocks have changed again.

One of the big problems with changing to daylight saving time is that it disrupts your sleep patterns and habits. Your body isn’t ready to fall asleep at your usual bedtime, because despite what the clock says, your body knows it’s an hour earlier. And you have the same issues when your alarm clock rings! This sudden one-hour shift each spring has been associated with more heart attacks and strokes. Automobile and other types of accidents also increase.

If daylight saving time becomes permanent, as proposed, then on the ‘shortest’ days of the year in terms of daylight, you’ll be getting up and starting your day in darkness. By the time your internal clock get itself together for the day, the gap between it and the ‘real’ clock will be significant. When I was researching this, I kept thinking it couldn’t be that big a deal … but science and statistics that is a very big deal.

Another option would be to adopt standard time year-round, which is what most of the world does. Experts indicate that doing so would eliminate the potential short-term health problems and definite aggravation caused by changing the clocks twice a year and trying to adjust to the result. Experts on the subjects of sleep, productivity, and behavior seem to universally agree about this

What do you think? Do you prefer to change the clocks and keep the system we currently have!? If you’d like to see that system change, where would you prefer to have us stay – on Daylight Savings Time or Standard Time? Tell me your thoughts about this or anything else find yourself being a winning commenter. E-mail me at frominhere@gmail.com.