I was on TikTok the other day and came across a clip of a young woman modeling on a runway. What’s the big deal about that, right? Well, she was much larger than the typical model in the fashion show.

She was beautiful and confident, and she owned that runway. A look in the comment section revealed some people spewing insults and disparaging remarks about her size. But the majority of remarks were enthusiastic and complimentary. People were applauding her beauty and her confidence the things I noticed. They were also commenting on how incredibly empowering it was to see a woman of her size on the runway.

The model’s name is Ella Halikas. The runway I saw her walking was that of a fashion show for Victoria’s Secret. I looked her up and found she was also a Sports Illustrated swimsuit model. These big corporations don’t make altruistic decisions. Decisions are made because there is money to be made. Still, though, that doesn’t take away from the fact that a model like Ella Halikas is really doing much more than just modeling skimpy swimsuits or other attire. She’s living proof that you don’t have to be a size 0 or 2 to have value.

Below is a picture of Ella Halikas: 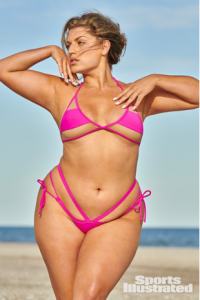 I’ve read interviews she’s given where she’s talked about what she considers the reasons for her success. These seem to be the primary ones:

She’s not the first successful plus-size model. Halikas cites Ashley Graham as one of her own role models, another very successful model in the niche category of plus size. Around five years ago, when Graham was the top story in the fashion news, there are multiple studies about the impact of plus-size models on women and girls. Without exception, these studies all showed that plus-size models positive impact on the mental health of women. It’s certainly not difficult to understand why that’s true.

Below is a picture of Ashley Graham: 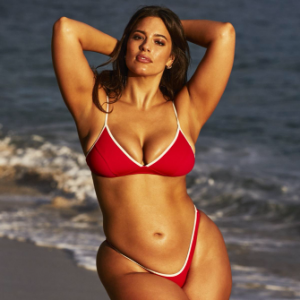 Seeing one’s self somehow reflected on a runway or in a fashion magazine, or in social media as a standard of beauty provides a means of validation. Even though you may staunchly assure yourself that you don’t need that type of validation … it still has a positive effect.

The Dove beauty brand began capitalizing on this truth some years ago. It began with beauty campaigns that featured all different women, different age categories, different ethnicities, different body types, and more. Below is an example of one of their campaigns. 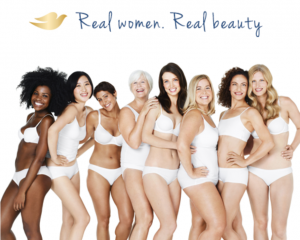 Diversity and inclusivity have become trendy in fashion again. I have no doubt that for those people who identify with these models, the images are certainly impactful.

However, none of those groups are as significant in number as that of plus-sized women and girls. I found multiple sources stating that, in the United States, between 60% and 70% of the female population wears a size 14 or above, which makes them “plus-sized”. 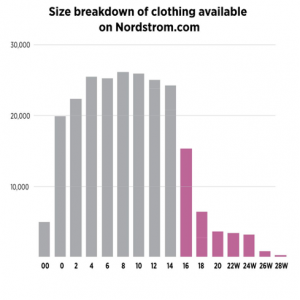 The battle for better self-esteem, more confidence, and other empowering perceptions of ourselves is always going to be an ongoing struggle. In a perfect world, no one would be considered too heavy or too thin, too tall or too short, too busty or flat chested, too dark-skinned or too pale, and on and on. Of course, we don’t live in a perfect world. Far from it. So we have to applaud the victories that take place, and Ella Halikas is an excellent example of that.

Do you have any thoughts about this issue? Do you think models such as Ella and Ashley Graham belong on the fashion runways, or are they glamorizing that which should not be glamorized?  Remember, if you e-mail your thoughts about this or anything else to me at frominhere@gmail.com,  you just may find yourself named as a prize winner in the newsletter next week