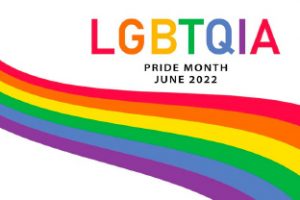 I can’t let Pride Month 2022 go by without addressing something truly disturbing that’s been going on. In 2021, state lawmakers passed a startling number of legislative attacks on LGBTQI+ communities. Nearly 400 anti-LGBTQI+ bills were introduced across the country in 2021. Some of the legislative measures give states the authority to discriminate against LGBTQI+ people and families. Others erase LGBTQI+ people from education curricula, as if they didn’t and don’t exist. There are some that deny transgender people access to health care. The list goes on …

Research indicates that last year, more than 100 bills were introduced to ban transgender youth from taking part in sports consistent with their gender identity. Some of the bills require invasive, unnecessary medical examinations to discourage participation. An array of 64 other bills would deny transgender youth access to best-practice medical care. Some go so far as to criminalize doctors for providing these young people with medical care.

Maybe this subject doesn’t interest you because it’s not something that affects you or anyone in your immediate family. Think about the fact that someday it might affect your family. Consider that it might be an important issue to someone you care very much about – but you don’t know everything about all their family members. Maybe think about how this is actually as serious as life and death for some people.

According to information from the American Civil Liberties Union, as of January 28, 2022, there were approximately 120 anti-LGBTQI+ bills active in about 30 states. These types of bills seriously restrict the rights of LGBTQI+ people. To give one example: A study by the Williams Institute estimates that a bill passed in Arkansas’denying medical care to transgender youth will affect an estimated 1450 young people ages 13 and above across the state. They will be deprived of medically necessary, best-practice medical care that can have lifesaving results. It’s just a single example of the problem.

Particularly when it comes to the subject of sports, I understand why this is such a hot-button topic; concerns about fairness in athletic competition are definitely understandable. Consider the recent controversy surrounding, Lia Thomas, a transgender qualifying collegiate swimmer of the NCAA Women’s Division I Swimming and Diving Championships at Georgia Tech. Although she has followed every eligibility rule and policy set forth by the NCAA, Thomas has landed at the epicenter of debate in the media about fairness and inclusion and whether those values are mutually exclusive. The case demonstrated to me that sometimes good intentions are not enough to assure a fair outcome, especially with adults.  However, rather than belittling teenagers and degrading them across national television, we have to find more civilized ways to reach reasonable solutions, especially when dealing with young people.

What Affects Do Policies Have?

When anti-LGBTQI+ bills are introduced, hateful and even dehumanizing rhetoric often accompanies them. Typically, there’s also plenty of misinformation and even disinformation. False ‘facts” and viciousness have bad outcomes for the LGBTQI+ people targeted by them – particularly the youth. I came across research data from The Trevor Project indicating that 66% of LGBTQ youth, including 85% of transgender and/or nonbinary youth, report that debates about state laws to restrict the rights of transgender people have negatively affected their mental health. There are other facts that bear out the truth of this, such as increased utilization of support services. The Trevor Project reported that between January and August 2021, crisis contacts from LGBTQ youth in Texas seeking support increased 150% over the same time period in 2020. According to the report, many of the transgender and nonbinary youth who reached out for support described themselves as “feeling stressed, using self-harm, and considering suicide due to anti-LGBTQ laws being debated in their state.”

This is a Congressional bill that prohibits discrimination based on sex, sexual orientation, and gender identity in areas including public accommodations and facilities, education, federal funding, employment, housing, credit, and the jury system. The Equality Act seeks to incorporate protections against LGBT discrimination into the federal Civil Rights Act of 1964. It also seeks to expand existing civil rights protections for people of color, women, and other minority groups by updating the definition of “public accommodations” to include places or establishments that provide:

Why is the Equality Act Needed?

The Equality Act would strengthen and expand federal civil rights laws to include clearly defined and consistently applied nondiscrimination protections for LGBTQI+ people in all 50 states. It’s not a matter of preferential treatment; it’s a matter of equal protection under the law. The nonpartisan Public Religion Research Institute conducted a survey in 2021 and found that over 80% of Americans, including majorities in all 50 states and majorities of Republicans, Democrats, and Independents, support LGBTQ nondiscrimination protections like those found in the Equality Act.

It also found that clear majorities of people from all major religions support laws protecting LGBTQ people from discrimination. A poll conducted by Quinnipiac University in April 2019 found that 92% of American voters believed that employers shouldn’t be allowed to fire someone based on their sexual orientation or sexual identity, while only 6% believed that employers should be allowed to do so. There are additional polls and studies all showing similar results to the ones I listed here.

Various versions of bills similar to the Equality Act have been introduced in Congress since the 1970s. The modern version was first proposed during the 114th session of Congress.  On May 17th, 2019, during the 116th Congress, the House of Representatives passed the bill but it was never acted upon in the Senate. On February 18th, 2021, it was reintroduced into the 117th Congress and passed in the House of Representatives. It was referred to a committee in the Senate and has not yet been brought up for a vote.

2022 has thus far seen more legislative attacks by states against the basic rights and dignity of LGBTQI+ people. To me, it’s shocking to think that some state legislatures are effectively trying to create a country where one child in a household, one neighbor on a street, one co-worker at a place of employment, or one human being anywhere has more rights than another just because of who they are. It’s about as un-American as you can get.

What Should I Do?

If you want to do something meaningful for Pride Month, encourage your senator or senators to press for the Equality Act to be brought up for vote, and to vote in favor of it. How can we claim to have shared values of freedom, justice, fairness, and human dignity for everyone … while we don’t?  Passage of comprehensive protections against discrimination would help ensure that everyone gets equal treatment under the law, without some people being designated as ‘less’ simply because of who they are. We don’t have equality in America if some people are “more equal” than others.

I’d love to know what you think about this subject. Please feel free to reach out to me about this or anything else at frominhere@gmail.com. You just might find yourself being the winning commenter in next week’s newsletter.

2 thoughts on “Pride Month and the Equality Act”