There are few subjects as polarizing as gun control laws. It’s a complicated subject and people on all sides of each aspect are impassioned. When you look into it though, there’s a lot of misinformation and disinformation out there. This week I just want to write about a few definitions and state-by-state facts, as best I could unearth them.  This is a fact set that is constantly changing in different places. The information I’m sharing is generally from 2021.

A person can either carry a firearm as a ‘concealed carry weapon’ or as an ‘open carry weapon.’  Concealed carry means exactly that – firearms are tucked away. They aren’t visible to other people. Open carry firearms are out in the open. Each state individually decides what the rule is within its own borders. The states also decide the rules about permits for owning or carrying weapons.

Permit application procedures and requirements also vary widely from state to state. The simplicity or complexity of the process tends to mirror the degree to which guns are regulated within the state.

I want to repeat that I researched this extensively for the past couple of weeks and the information I’m sharing here is as accurate as I could make it.

8 states require owners of firearms to register their weapons with the state.

27 states have ‘Stand Your Ground’ laws.

Broadly speaking, these laws allow anyone to shoot someone if –

Some states have ‘shall-issue’ laws. This means that as long as an applicant passes the basic requirements set out by state law, the issuing authority (county sheriff, police department, state police, etc.) is compelled to issue a permit. There are 34 shall-issue states which are in green in the map below. 7 of them are shall-issue to residents only, and as follows: 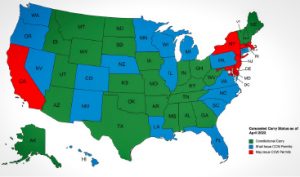 Other states have ‘may-issue’ laws. This is when a permit is required, and local authorities help determine whether permits are given. These states are:

According to its state law, Rhode Island is a shall-issue state. Its attorney general may also issue permits. Under state law, local law enforcement shall issue permits to eligible applicants as long as the individual appears eligible and has a “proper reason” for carrying a handgun, such as the individual “has a good reason to fear an injury to his or her person or property.”

In some states, there are no-issue laws. This means that most private citizens are not allowed to carry concealed handguns. In California, this is the case in 12 counties. In other areas, while these laws are not technically on the books, they are in practice. The states that have these laws in practice are:

The states that do not honor any other state’s concealed carry permits are:

Why does all this matter??

A mass shooting is defined as one in which at least three people are shot. Just in the first six months of this year there have been 248 mass shootings. It’s a number that makes you think it couldn’t possibly be accurate … but as of the moment that I’m writing this, it’s very accurate. Hopefully by tomorrow morning it hasn’t gone up again.

Firearms, money, and politics are intertwined, which means a lot goes on behind the scenes that most of us never know about. Sometimes we have to start by looking at things at the most basic levels to get a better grasp of the landscape of the arguments. I try to be a reasonably well-informed person, and still, some of the facts listed in this blog post were startling to me.

Do you have any thoughts about this, or about the situation where you live? As always, please feel free to e-mail me at frominhere@gmail.com about this or any other subject.

2 thoughts on “Gun Laws Across the Nation”