My family has three dogs. The first one just turned 13 a few days ago. The second one will be 8 in August, and the baby of the bunch turned six last week.

One of my children, the tool I get type, the two-legged type, made sure to point out to me that one dog year equals 7 human years, I couldn’t accept that, so I started researching.

Here are some fun facts I found out:

Do you want to Calculate Dog Years to Human Years?

As a general guideline, the American Veterinary Medical Association breaks the calculation down like this:

How Do Researchers Come Up With Those Numbers?

There are multiple factors to consider, so it’s not possible to pin it down precisely, but while researching, I found that cats and small dogs are generally considered ‘senior’ at seven years old, but we all know they’ve got plenty of life left in them at that age. Larger-breed dogs tend to have shorter lifespans compared to smaller breeds and are often considered senior when they are 5 to 6 years of age. The ‘senior’ classification is based on the fact that pets age faster than people, and veterinarians start seeing more age-related problems in these pets. 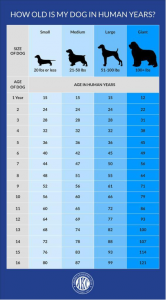 Why Do Smaller Dogs Live Longer than Larger Dogs?

This phenomenon has stumped scientists for years, and research has yet to explain the relationship between mass and a dog’s lifespan. Generally speaking, large mammals, like elephants and whales, tend to live longer than small ones, like mice. So why do small dogs have a longer average life span than large breeds?

Large dogs age at an accelerated pace, and “their lives seem to unwind in fast motion,” according to a researcher from Germany. Scientists concluded that every 4.4 pounds of body mass reduced a dog’s life expectancy by about a month. The reason why is still unknown, which is crazy, but I am happy I personally have small dogs. Means I will get some extra time with them, hopefully.

How old is my cat in human years?

Although there’s no reliable scientific way to calculate the relationship between human and cat years, it’s generally agreed that the first two years of a cat’s life are roughly equal to the first 25 of a human. After this, add four ‘cat years’ for every human year. This means if your cat is six years old, their equivalent cat age in human years will be around 41. How old does that make your cat?

How many cat years are in a human year?

The first year of your cat’s life is considered the equivalent of 15 human years. The second year adds nine more human years to the total, which means 2 cat years are approximately 24 human years. After this, each additional human year is around four ‘cat years’.

Canine gerontology is a burgeoning field of science, as dog lovers are looking to not only extend the amount of time they have with their pets, but to improve the quality of that time. Whether measured in human years or dog years, as our dogs mature and age there is beauty and charm at every step along the way. With their gray muzzles and wise expressions, senior dogs are especially lovable and poignant. Feline gerontology is an equally important field of science. Cat owners adore their sweet older pets just as much as their adorable kittens. Helping them to live longer, happier and more active lives is extremely important.

Evidently, people have been comparing human-to-dog years for centuries.

In 1268, the artisans creating the Cosmati Pavement in Westminster Abbey inscribed into the floor a prediction for Judgement Day: “If the reader wisely considers all that is laid down, he will find here the end of the primum mobile; a hedge lives for three years, add dogs and horses and men, stags and ravens, eagles, enormous whales, the world: each one following triples the years of the one before.”

By this math, a dog lives to nine, a man to 80. If these statistics were accurate, between 1268 and the mid-20th century, dogs had a year trimmed off their lifespan, and we lost almost a decade. Luckily for both species, our lifespans have gone in the other direction.

I’m hoping some of my research helped shed some light on the information you may have not even known you needed! Do you have any pets at home? Did you know any of what I shared before reading? Send me an email, and I’d love to know if you have pets at home and what their ages are! My email is frominhere@gmail.com , I’d love to hear from you!

Below is a picture of my dog Madison who just turned 13! After reading this article, can you figure out her age in human years? Send me an email with the answer to be entered into a surprise drawing! 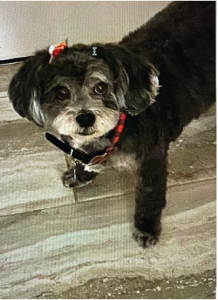