Have a bad day? A rough week? Well, I have five words for you that just might help. Ready? Here you go: 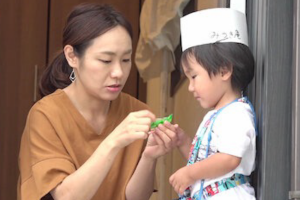 Yes, you saw that correctly. ‘Babies Doing Errands’ is the premise of a Japanese reality series that’s been in existence for 30 years or thereabouts. A friend was describing it to me this week and it sounded absolutely crazy, but she said it was her favorite show at the moment. She kept telling me she came across this amazing but almost unbelievable show streaming on Netflix, and that I just had to watch it. The episodes are short, but I will admit I watched 10 of them in a row. Don’t judge! You probably will too, if you check it out.

Known in Japan as Hajimete no Otsukai, which translates to My First Errand, on Netflix the show is called Old Enough!. It follows all different toddlers in Japan, ranging in age from 2 1/2 to 5 years old. Each young child is sent out on errands for their family. And I don’t mean taking something to the house next door. Nope, nothing anywhere nearly as simple as that.

We watch as each adorable and clumsy little kid carries out some incredibly complicated tasks for their age. A parent of each child verbally explains a list of errands to be run, usually including some items to be purchased. The child has to remember each thing to be accomplished.

Here are some examples: 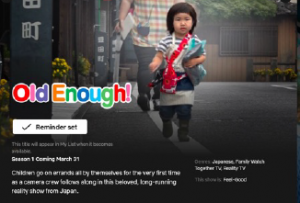 These are young children, so of course, things don’t always go smoothly. They run into the occasional obstacle along the way, like forgetting to purchase the sweet curry, not knowing how to harvest a head of cabbage, getting distracted by a dog, or walking by the store they’re seeking without noticing it. Every time they nearly fail, I find myself desperately wanting to give them a hug and tell them that they can overcome the problem and accomplish the task!

Isn’t that all dangerous for a little kid to do alone?

When my friend told me about this show and described it, that was my first thought. Who in their right mind let little kids run off on their own with nothing but a brightly colored backpack, or some other little thing?

From watching the show and doing a little research about it, my mind was put at ease. The show itself takes serious precautions to be sure that every child is safe throughout the experience. The errands are devised primarily by the parents. Routes the kids take are evidently inspected carefully by the crew of the show and the parents before filming to make sure the child won’t be faced with danger.

In each episode, kids are accompanied by a sizeable camera crew. There’s also a safety team to keep an eye out for any unexpected problems or complications. The camera crew isn’t allowed to help the children. Usually, kids are assisted as necessary by people working in stores, people watching along the street when they realize what is going on, and occasionally random people they come across on the way to their destinations. Adults the children don’t know but realize the show is filming, sometimes offer sincere encouragement. 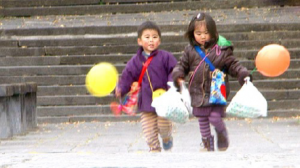 Many of the episodes I saw took place in areas that seemed suburban or rural. Then I watched one where two 4-year-old neighbors in a high-rise building in downtown Tokyo go on some errands together. From what I saw, any episodes that take place in a big city are carefully plotted and happen within a small neighborhood of that city.

How did the kids do?

The kids I watched were all adorable, and I really wanted to see them succeed. It usually takes a lot of encouragement from the parents to get the child out the door and on their way, and occasionally there were even some tears. The kids were always lovingly encouraged to help out by doing the errands.

These are very young children. When they get started on their errands, some get distracted right away. Just like adults, many forget something on their shopping lists; again, as adults do, they either remember and go back for what they forgot or decide to buy something else instead.

No matter the complications or difficulties the kids may encounter during the process of doing their errands, they always come home feeling proud of themselves, and with more confidence than they had before. It’s obvious how anxious some of the parents are during the process. When errands are completed, and the child is home, the pride emanating from some parents burns right through the TV screen.  Love and pride are beautifully universal, and so is the struggle to protect our children and yet help them grow up confident and capable.

I understand that more episodes of this show are on YouTube. If you need a few 10 to 15-minute bursts of wholesome entertainment, check it out there or on Netflix. I’d be interested to find out what you think of it, so feel free to contact me at frominhere@gmail.com about it, or anything else on your mind.