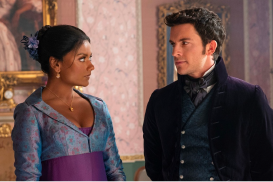 The other day was one of those days when I was caught up in my own head. You probably know exactly what I mean. Worrying about one thing after another for hours. When nighttime finally came, it wasn’t any better.

I impulsively decided to go on to Netflix and see if I could find something to watch. I was glad to see Season Two of Bridgerton was just started.  Apparently, it came out within a day or so of when I looked on Netflix. I really enjoyed Season One, so I clicked the advertising banner on the website for the show. For those of you who don’t know, Bridgerton is a Netflix series based on a series of Regency romance novels about the Bridgerton family.

The show is exquisitely filmed with stunning locations, costuming, and everything else.  The cast is excellent. I didn’t even realize that Netflix puts on the whole season of shows at once until the first episode ended, and seamlessly melted into episode 2. I’m only a little embarrassed to say I may have cheered out loud. When episode 8 finally started, for a moment I had some regret that I’d actually watched the whole season already. But overall, I’m glad I did it.

Binge-watching can make a show more fulfilling because you get to experience the pleasure of being fully immersed in the world of the show or the story. Seeing episodes in order, one right after the other, or reading books that way, keeps things fresh in your mind. Multiple, complicated storylines, nuanced relationships, multidimensional characters that grow and change, and rising tensions all make for excellent binge-worthy material. Watching the episodes or reading the books one after the other can make the story easier to follow and more enjoyable than a single one at a time with a gap in between.

It was like the feeling of eating the last perfect apple in the bushel or biting into the last decadent piece of candy in the box; you savor it, but you have a moment of regret that it’s coming to an end. I felt the same way a year or two ago when I binge-watched all three seasons of The Fall in just a couple of days.

Why do we binge on television or books?

As I struggled through the next day with no sleep, I wondered why we do that to ourselves? Why do we binge-watch things? I know it’s common, and Netflix even encourages the behavior in some of its marketing materials and advertising.

When I looked into it, I found out that binge-watching your favorite shows can be an indication that you have poor impulse control. Ha! As if my behavior around frosted chocolate brownies wasn’t enough of an indication of that.

However, we can’t just blame ourselves for watching one episode after another! I don’t know about other platforms, but Netflix autoplay just starts the next episode without any viewer interaction necessary. I read that you can disable autoplay, but I didn’t know that at the time and I doubt I would’ve done it anyway.

In the interest of full disclosure, I’ll admit that sometimes I do also binge-read. In those cases, it’s typically inspired by a particular author, or occurs within a particular genre.  For example, I might read several workplace romances in a row, several sports romances consecutively, and so on.

Good things about it!

If you criticize yourself for binging these types of entertainment, take comfort in knowing that it can establish and reinforce social connections, something that was weakened during the early days and height of the pandemic. A sense of community around a show especially is something experts call a “shared cultural space.” This common ground allows viewers to discuss and enjoy the show with everyone from friends to coworkers, to strangers in line at Dunkin’ or the supermarket.

Some of the research I found states that binge-watching has health benefits like stress relief. Apparently, binge-watching releases dopamine in the brain, which has the effect of creating feelings of pleasure, which can help people relax and relieve stress. Some mental health professionals claim that finishing a series can give viewers feelings of control.  Many people have lost all sense of that in recent years and can benefit from even the tiniest of boosts.

Is there anything you ever binge-watch? Or maybe you binge-read? If so, you know I want to know! Email me about that or anything else at frominhere@gmail.com and you just might find yourself as a winning commenter in the newsletter next week.