It seems like almost every single day gas prices are hitting new highs. I don’t get to see the pumps personally, but both of my driving daughters are horrified by the prices they’re now paying. My son has been keeping track of what he sees when he’s on the school bus, and he’s fascinated by the differences even between gas stations. As he said, the numbers are high, higher, and highest. 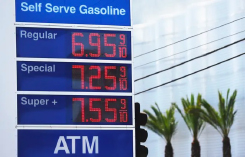 I’m equally agitated by the increasing cost of home heating oil. The prices are creeping up and up and up.

Why is fuel is so expensive? Whose fault is it? When is it going to get better?

I’ve been researching this like an obsessed person, trying to dig through the political stuff and find real answers. There’s a lot of incorrect information, mistakes, and outright false narratives.

The facts indicate that today’s exorbitant gas prices have their roots in the pandemic. Thanks, COVID-19. Then, the Russian war on Ukraine has steadily helped push gas prices higher.  Globally, the pandemic had a big effect on supply and demand.

The pandemic shut down things in the United States in mid-March of 2020. With lockdowns, businesses closing or changing to remote access, and all recreation either ending or shifting to remote, the demand for gasoline took a nosedive. According to reports from the American Automobile Association, most drivers reduced their driving by half or more. Much less driving = Much less gasoline being purchased.  As a result, in April 2020, the average price of a gallon of gasoline in the USA was $1.94. 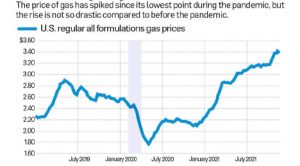 When the demand for gas and oil dropped so much during the pandemic, OPEC (Organization of Petroleum Exporting Countries) and oil-producing nations such as Russia all reduced their production by a significant amount – they cut 10% of the global supply.

I found accounts from more than one qualified analyst stating that as the global economy recovered more and more from the pandemic, OPEC was much slower to bring up its production levels again. Apparently, they waited to do so until July 2021.

What has affected gas prices recently?

Russia’s war on Ukraine has rapidly pushed up oil and gas prices by more than 20%.

On March 8th, President Biden announced a ban on US imports of Russian oil and gas. Exporting those things is Russia’s primary revenue source in the middle of the conflict, so it’s not difficult to understand the purpose of doing that. But the United States only typically imports about 8% of its oil and gas from Russia. Why then, are our prices impacted so much by it? Apparently, our refusal to accept Russian oil and gas impacts their ability to have their products flow to the wider global market. The global market effect impacts our prices. 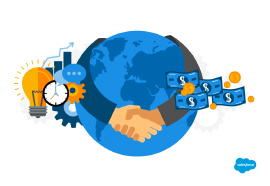 I’ve noticed some people blaming President Biden for higher gas prices. I can’t stand to not point out how it doesn’t make sense to do that. They point to the decision last year to cancel the Keystone XL Pipeline. Some people also blame Biden’s executive order to pause oil and gas drilling on federal land in January 2021. (A federal judge in Louisiana blocked that order in June.)

There have been increases in oil and gas drilling under Biden, but companies in the U.S. are restricted by supplies of rigs, trucks, and labor that they need carry out operations to supply more oil.

So, when are gas prices going to go down?

I read quite a lot of projections about this and experts project that gas prices will remain elevated for months. No one can be more specific, because the variables are just that ..  Variable

I hope the information shared here helped shed some light on the frustrating subject of gas prices. I was reading and hearing so many things that just didn’t seem right, I can’t stand all the misinformation out there, so I had to look into it. Hopefully what I learned will be of interest to some of you!

How have gas prices been where you live? Have you been hearing a lot of wrong information as I’ve been? Feel free to share your thoughts and opinions with me at frominhere@gmail.com. You may just find yourself receiving a thank you and a gift in my newsletter next week! And if you noticed some highlighted words in the article you just read, make a sentence out of them. Email it to me and you may find yourself in the newsletter for that reason too.