My oldest child just turned 21. It’s a mind-bending reality. I’m actually not sure which of us finds it harder to believe – her or me.

Turning 21 is something many of us looked forward to, even though turning 18 is what makes you a legal adult. 18 is the age at which you can vote, go to an R-rated movie, buy a house, enter into a contract, sign tax forms, be tried as an adult in court, and make your own medical decisions.  At age 18 you can join the military. 18 is also the age at which young men must register with the Selective Service System in case there is ever a military draft again. I actually remember being with my husband (at that time my boyfriend) when he went to the post office to fill out a form.

There are other rights and responsibilities that go along with turning 18, but I think for most people it’s when you turn 21 that you really feel like you’re an adult. Among other things, at age 21 you can legally drink alcohol and gamble. Even if you choose to never do either of those things, having the right to make that choice is very Adult.

The transition from adolescence and young adulthood into being a 21-year-old adult is frequently stressful, often disquieting and uncomfortable, and downright difficult. Responsibilities multiply dramatically. The issues you face become increasingly complex: where are you going to live, with whom will you live, what are you going to do with your life?  It’s definitely a momentous birthday.

The 21st is also a birthday that’s hard to buy a gift for. Yes, you could get a booze-related gift for the newly legal birthday honoree, but sometimes that doesn’t feel right. My son gave his older sister an insulated beverage tumbler that declares its user is ‘Vintage 2000’. That seemed right to him because he was confident she’d like to be able to take it in her car and put it in the cup holder.

As her Mom, I’d been anticipating this birthday for a long time. We have a very small family, so a big dinner or get-together was out of the question. I also have a lot of limitations because of my disability.  I would have loved to take her on a vacation with me, but that was physically impossible. I decided the next best thing would be to send her on a trip with a friend or her boyfriend.

I started budgeting months before I broached the idea to her. I thought she’d like the idea. I knew she was somebody who would value experiences because that’s what she had chosen instead of a Sweet 16 party. That year, I got her tickets to multiple concerts and Broadway shows because she really didn’t want a party. I chose the events themselves because I knew what she liked and might be interested in. Planning a big trip was a totally different thing.

After I brought up to her the idea of a trip for her 21st birthday, she loved the idea and asked if she could go to California. We started planning. A lot of time was spent figuring out where in California she really wanted to go, and what types of things she wanted to do while there. Tour a few of the highlights in LA   Go to wine country, or somewhere to do with alcohol. Spend time at a casino or two. Ride horses. Eat in some celebrity-owned restaurants and interesting restaurants. Have the experience of ordering cocktails in several places. Do a couple of fun things.

After I spent a couple of weeks orchestrating a plan of attack, I realized that she could better accomplish all but the very first item by going to Las Vegas, Nevada instead of California – and she wouldn’t need a rental car or to drive a lot the way she would have to for a California trip. I began to discuss it with her, and she very quickly realized the exciting potential of the Vegas idea. She’s there right now, enjoying her trip and making memories. For me, her trip stirred up a lot of my own memories.

After my trip to Las Vegas

I spent all of November and part of December of 1999 in the hospital and physical rehabilitation after being diagnosed with MS. In early February of that year, my husband surprised me with a trip to Las Vegas. We had a phenomenal time. He kept trying to get me to rest because I’d been out of the hospital less than two months at that point, but there was so much to do and to see that the very last thing I wanted to do was rest!

In early March, just a few weeks after we got home, I went to an appointment with an OB/GYN who specialized in higher-risk pregnancies. My neurologist had assured us that any children we might have would be at no greater risk than the general population was for developing MS. I had the appointment scheduled to make sure that everything seemed OK for me to be able to get pregnant. The first thing they do is give you a pregnancy test even though you’re there to talk about getting pregnant. You can probably guess where I’m going with this … Yep, the doctor herself came back in the room to inform me that I was already pregnant.

I remember getting in the car at the doctor’s office and just sitting there blankly staring out the window at the brick building in shock. While I was sitting there, Chris called. He was looking to see how the appointment went and if everything was OK or what the doctor had to say. I wanted to tell him the good news in person but when I said everything was fine, apparently something in my tone of voice told him that I wasn’t saying something that mattered. He got very worried and asked me to please tell him what was wrong. Chris sounded so worried, and I caved. I started shrieking and crying, sharing the good news in a way that had absolutely no style or panache. So this is, technically, my daughter’s second time in Vegas.

It’s a sad fact that happy events and happy memories often trigger feelings of grief and melancholy when they bring with them thoughts of somebody who has died. My daughter misses her dad, fiercely. I miss my husband, dreadfully. I mourn for all the things he has missed, and the many things still to come that he will miss. We try to comfort ourselves by saying that those who are gone are still with us, but it’s not the same and everybody who’s ever felt this way knows it.

Well, what can you do about it? Truthfully, not that much. You either live the best you can, or you give up. There have been lots of times I didn’t know how I would make it through the next hour, let alone the next day, week, month, or year. My daughter’s birthday and the gift I gave her celebrate my joy at her existence and make me grateful that I could give her that experience. The occasion crystallizes my sadness that my husband isn’t here to celebrate and makes me long for the great times he and I had together. It twists the parts of my heart and soul that quietly mourn him all the time.

Sometimes you have to crawl into that dark place because the sadness in life can’t be ignored or avoided completely. You can’t live in that dark place, though. You have to find a way to crawl back out into the light. It’s fine to need help to find your way. You don’t have to emerge onto the same path you were on before. Forgive my crass phrasing, but I know it sucks. Focus on getting through and it will gradually get at least a little better.

I’m going to keep loving my kids and keep appreciating the good moments that happen in my life. I’ll smile and share good memories and when I cry or feel angry about moments and years that were stolen from us, I’ll sometimes share that too … but sometimes I’ll reserve those heart-wrenching times for myself because some pain is too deeply personal to share.

It’s not Las Vegas but you can win!

How do you cope with the times that pull your emotions in multiple directions? I’d really like to know. Email me at frominhere@gmail.com with whatever thoughts you’d like to share. Of those who email, someone will be chosen to win a prize.

Bonus: Tell me what drink Amanda is enjoying at Hell’s Kitchen in the first photo and/or where in Las Vegas she is standing in the second photo, and you’ll have a chance to win a gift from me. Email your answers to frominhere@gmail.com 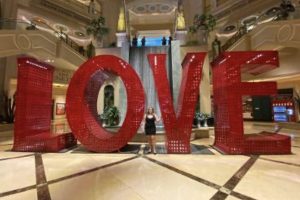