A couple of times a day I give myself 15 minutes or so to look at TikTok. I have to be conscious about the time because it’s definitely an app that can pull me into the ‘rabbit hole’ where time and place vanish because the content is so entertaining or interesting.

In the past week I’ve seen several videos posted by users outside the United States making reference to the crazy behavior people have been displaying across the country at school board and town hall meetings.  I myself have been horrified by some news clips I’ve seen of the out-of-control and aggressive antics that have been caught on tape. Well, it seems to be a global fascination.

When you think of ‘school board meetings’ you would typically think ‘boring’.  I used to attend them sometimes and they were somewhat stodgy, with lots of rules and protocols. I used to get frustrated at very strict procedural requirements that made it hard to get an opportunity to speak or ask questions at the meetings

Now, school board meeting coverage nationwide is dominated by people behaving in ways that would earn a child a time-out. Yelling and screaming. Name calling. Cursing and other abusive language. Heckling and jeering. Vulgar gestures. Arguing with security personnel who are trying to maintain order. Threat of violence. Actual violence.

A lot of the uproar is about mask policies and mandates. Some of it is about transgender policies or race theory.  I want to make it clear that in this particular article I’m not choosing sides in any of the arguments currently rocking school board and town hall meetings.  My point is the bad behavior at those gatherings.

No matter what the issue happens to be, when did it become acceptable to behave this way?

These behaviors are not just directed at adults. I watched a recording of an adult woman derisively laughing at a teenager who said she was in favor of masks because she was worried about people like her father, who has one lung. There was a nauseating video of people laughing at and mocking others who spoke about the need to comfort kids who have lost a parent or other close family member because of COVID-19. 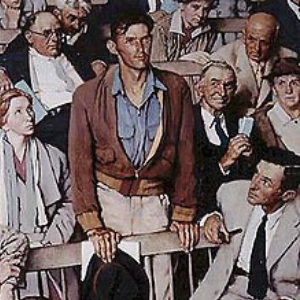 The image above is Norman Rockwell’s “Freedom of Speech”.  It shows a man ready to speak at a town hall meeting. He appears to be calm and collected, not screaming and raging.  The image below is from a school board meeting in Virginia, in June 2021. Several issues on the discussion agenda were topics that people couldn’t manage to discuss without anger, rage and the intervention of law enforcement. 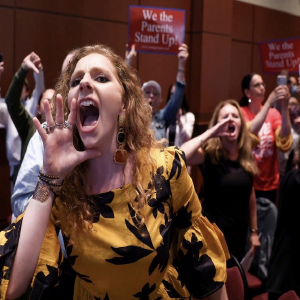 Impassioned arguments are a good thing, as long as there is some semblance of structure, so things don’t go haywire completely. In government, complex and detailed rules of procedure maintain civility in debates and arguments.  The school board meetings I attended in the past had such types of procedures in place, though they were not clear and seem to be designed to limit debate a bit. Now it seems fury and turmoil rule the day. People ignore procedures for conducting civil, productive meetings in favor of reveling in complete chaos

It might feel better in the moment to vent. Freaking out can be cathartic, but in the end it’s just not productive. It would be helpful if we could all somehow get along, but that’s never going to happen. To at least act like a civilized society, I think we’d all do well to remember a few things:

Being the loudest doesn’t make you right. Sometimes it’s perfectly fine to yell.  But if you want to be taken seriously at a public meeting, losing control of yourself or your temper makes you look ridiculous and undermines your message. People focus on the volume of your words and not the words themselves.

Belittling other people doesn’t make your case, advance your position or get people to change their minds. I feel ridiculous actually writing this but I believe I need to  … when you verbally abuse people you only make yourself and your cause look bad.  The focus becomes your malicious words, not the argument you’re trying to make.

If you want other people to listen when you talk, you really need to listen when they talk. There has to be a ‘give and take’. Quid pro quo. Constantly interrupting people who have other opinions is kind of like putting your fingers in your ears and saying “I can’t hear you” like a bratty little kid might do.

It’s hard to argue with truth, facts and reality. People do still argue of course but it’s harder.  There is also a substantial percentage of people who prefer to cry conspiracy and lie about any facts that they don’t like. There’s not much you can do about that, except stay calm and rational. Ultimately, you can’t force somebody to listen to reason.

If somebody is arguing their point of view based on emotion, then you’re not going to persuade them otherwise based solely on logic. If they’re making decisions based on emotion, you need to make an emotional appeal to them. You must ‘speak their language’ so you can make a connection that resonates.

Do you want good people to serve on the school board in your area? Would you like to have good local politicians, strong civic leaders in your area, and national politicians who make you proud? I don’t need to know you personally to say that the answer can’t possibly be anything but Yes.

When everybody in those positions is constantly subjected to a maelstrom of hate and viciousness, how can we expect good people to seek those roles?

I think we all have to take a good look around and resolve to do better.

Have school board meetings or town hall meetings in your area made the local press for negative reasons? What are the hot button issues where you live? Any other thoughts you’d like to share about this issue? Email me at frominhere@gmail.com and you might win the weekly comment drawing.