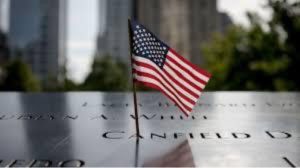 It’s been 20 years since the September 11th that changed history. An entire generation has grown up not really knowing what it is to have lived through that day. Some of the comments I’ve read on social media after the military withdrawal from Afghanistan have made that very clear.

Some people were too young in 2001 to really remember the events of that September. Some older people simply don’t remember what transpired very well; people have notoriously short memories.

I remember that day all too clearly. I also vividly remember the days that followed. I didn’t lose a loved one on that day, nor as a consequence of it in the years that came afterward. Yet even so, the memories are sharp enough to still be vivid. The scope of the evil was incomprehensible. The images from that endless day and many that followed were both too horrible to look at and too disturbing to look away from. They were all too real, yet somehow still incomprehensible.

When I read some comments on various social media platforms, it makes me incredibly frustrated that people have such short memories about what took place on 9/11/01. Even though I was blessed to not have lost my husband that day, if the attack had been just 48 hours later, I would have.

For thousands of families, there was a very different outcome. And that doesn’t include the survivors and first responders who have suffered ongoing mental and physical trauma. My respect, admiration and appreciation for them is more than words can express.

Here I share my own experience, which was merely on the periphery, and yet still changed me forever.

My experience on September 11

On 9/11/01, my husband Chris kissed our daughter Amanda and me good-bye when he left the attached townhouse in which we lived, to walk to the train station. She was 10 1/2 months old. He worked at the New York Stock Exchange on Wall Street in Manhattan. We lived where we did because it was just a block and a half walk to the train station, and from there a 35 minute train ride into the city.

I got Amanda dressed and ready for the day.  The townhouse had 3 bedrooms and three levels.  On the lowest level was the ground floor basement. In that basement we had a home office. I went down there with Amanda, to get some work and some scrapbooking done. She fell asleep in my arms. I put her in the playpen to nap and turned on the small tv we had down there. I started updating my scrapbook. I remember I was watching a television show called ‘A Baby Story’ when my phone rang. My mother told me there was a plane crash in NYC. I immediately changed to a news channel.  I booted up my desktop computer.

The news reporters were stunned and overwhelmed with conflicting information. It was more than shocking. Chris and I had just gone to Windows on the World for dinner maybe a month prior. I couldn’t remember atop which Tower the beautiful restaurant was located, but it was a wonderful place.

Then the second plane hit the second tower. My phone was ringing over and over. I picked up my sleeping baby and stood in front of the tv. A tower fell. I remember soothing Amanda even though she was not making any noise. I realized later that I was trying to soothe myself.

Chris was in the Towers often for work. He had told me he had a breakfast meeting that week at Windows on the World. I could not remember what day it was scheduled to take place. Tuesday? Thursday? I frantically tried to remember.

One tower fell. Would the other fall? Where was he? If he wasn’t at the Towers, how close was the NYSE building to them?  If this was an attack of some kind, was the iconic NYSE building going to be attacked as well?

I left a message on his voicemail. I logged on to Yahoo message boards, to a great group of ladies I had come to know when we were all pregnant with our October 2000 babies . The computer let me communicate with people and be less alone without tying up my phone line.

There are news reports of other planes crashing. A crash into the Pentagon. A crash in a field in Pennsylvania.  The other tower falls. Rocking Amanda. I see her little shirt is wet and don’t know why, then discover it is because I am crying.

The phone rang several times. I rushed off the phone to keep the line clear.

And then hours later it was Chris on the phone, calling from a cell phone borrowed from a stranger because he himself couldn’t get a signal to make a call.

The second plane to hit the towers had flown overhead as Chris emerged from the subway that morning. He said he immediately realized that planes don’t fly that low over Manhattan and he knew something was very wrong. He rushed back down to the subway and made it onto one of the last subway trains out of the city before transit lines were shut down. I forget where he ended up, but Chris was among the thousands of people who had to walk over a bridge to get out of Manhattan.

He ended up catching a ride home from somewhere near Jamaica in the borough of Queens. It took a long time. Chris was dropped off at his parents’ house, which was right by an exit off the Southern State Parkway. Amanda and I met him there. I remember how hard it was to breathe when I saw him and could see with my own eyes that he was okay.

That evening, we went out on our boat. From the water we silently watched the ominous cloud of smoke from the rubble of the Towers as it hung over the city. It was a scene that lasted for weeks.

Chris was home from work for about 2 weeks. When he was finally told to come into the city and his job at the NYSE again, he was to wear a mask to cover his mouth. The smoke from the heartbreaking debris was still that thick.

I was there on October 7. A Sunday. On the way home in the car we heard the announcement that a retaliatory military operation by the USA and her Allies had begun.

Chris’ breakfast meeting at Windows on the World had been scheduled for 9/13/01. Somewhere in my home I still have the memo. 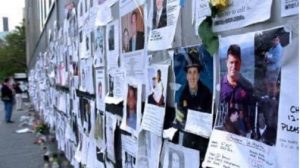 Our local newspaper published detailed obituaries at the beginning of the daily newspaper for weeks and weeks. Reading them was almost torture after a while, but I believe I looked at all of them because it felt disrespectful not to do so. Many towns on Long Island lost people on that terrible day.  There are a lot of plaques honoring and remembering the human cost of that day.

We do still remember those that perished that tragic day, the first responders, and the military. We have to also remember those who suffered and still suffer physically, mentally and emotionally because of that day, and because of the long war on terror that followed.  Their loved ones and friends suffered and still suffer right along with them. We can’t remember with the same level of visceral horror that gripped us then, nor should we. There has to be some kind of healing in order to survive. The experience of remembering, talking and sharing is all part of the healing journey.

Feel free to share with me your experiences or thoughts about September 11th because you know I love to hear from you. You can email me at frominhere@gmail.com.