What the heck is Labor Day?

Labor Day quite literally just passed by on September 6. In some areas people are back or almost back to working as usual, and in other areas the pandemic is on the rise again. Wherever you happen to be, and whatever the conditions are in your area, were you among those headed outside to celebrate the holiday also known as the unofficial end of summer?

The first Monday in September wasn’t always a day for BBQ cookouts, fun in the sun and gathering together for iced tea and beer. I did an extremely informal poll among my own three children to find out what they think Labor Day is. Only one of them got it partially right, and that one thought it was a holiday for office workers only. I casually surveyed 7 adults and asked them the same question. Only 2 of them answered correctly.

Somewhere over all the years since its inception, Labor Day lost its meaning. Now it seems to stand only for signaling the end of summer, the start of school in the eastern portion of the country, big sales and cooking out.  You might hear “the American Worker” mentioned in passing if you happen to hear a speech by a local politician, but it’s probably not much more than an exhortation made to enhance their own viability among voters.

The first Labor Day was celebrated 127 years ago as a tribute to all workers who have contributed to the success, strength and prosperity of the nation. It’s supposed to be a day to think about that.

Labor Day was intended to honor not just the individual worker, but what workers accomplish together. It was actually created because of organized activism.  It started off kind of like a general strike of the labor force. If you look at history you can see that there were frequently radical speakers who criticized capitalism and the super wealthy who profited so much because of the labor in their factories and other businesses. Socialist flags were even common at the rallies in early years.

Big issues of the labor movement benefited people who weren’t even union members. Workers rallied for shorter workdays, shorter workweeks, safer working conditions, anti-trust legislation, and the right to organize. The efforts were attacked by big business owners as un-American. Violence was often used to try and silence people.

Anti-labor employers struck back against workers’ rights with accusations of communism, strikebreaking measures, retaliatory blacklisting of individuals, and vigilante violence. They even rallied state government leaders to their side when possible.

Labor Day didn’t start as a national holiday. It was born in the streets of New York City on September 5, 1882. Different reports I’ve found indicate that between 10,000 and 20,000 workers marched from City Hall to Union Square Park, and then to the Upper West Side of Manhattan. Wendel’s Elm Park was the largest green space in the city at that time, located at 92nd Street and 9th Avenue, which is now Columbus Avenue.  There they gathered with their family members for a picnic, and a concert, and listened to rallying speeches. The workers included tailors, jewelers, blacksmiths, cigarmakers, milliners, railroad men, bricklayers, typesetters, carpenters and others. Estimates of the size of the crowd in attendance were as high as 250,000.

“We must Crush the Monopolies Lest they Crush Us.”

“Labor built this republic, Labor shall rule it”

In 1894 there was a nationwide Pullman strike based in Chicago. After being approached by the huge railroad companies and industrialists, President Grover Cleveland mobilized over 10,000 U.S. Army troops to break the strike. It was bloody. Strikers and protesters were jailed, injured, and even killed. As something of an olive branch extended to all workers, Cleveland signed legislation making Labor Day a national holiday.

Unions are credited with helping to:

My own father was a member of the Communication Workers of America. After he got out of the Army where he worked setting up communication lines during the Vietnam War, he ended up working for the local telephone company in New York. That’s what he did from the time I could remember. The name of the company would change, but he always worked for “the telephone company.”  I can’t remember how many times he went on strike during contract negotiations, but it seemed to happen every three years like clockwork. A couple of times the strikes went on for so long I remember my parents having serious financial stress about it. Despite that, they were always glad he was in a union.

I wonder if the main reason the real meaning of Labor Day has been lost is the decline of unions. Statistics indicate that union membership across the country has dropped to less than one in eight people, down from nearly one in four in the 1970s. According to numbers from about seven years ago, union members accounted for 35.3 % of workers in the public-sector and just 6.7 % of private-sector workers. With the decline in membership comes a decline in public support. 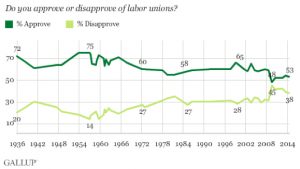 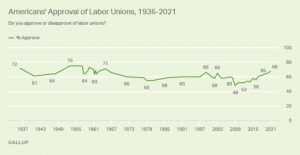 68% percent of Americans approve of labor unions. Though the result is statistically similar to last year’s 65%, the current reading is the highest Gallup has measured since 71% in 1965.

Gallup has measured the public’s rating of labor unions periodically beginning in 1936 and then annually since 2001. More Americans have expressed approval than disapproval in every reading. The current results are from Gallup’s annual Work and Education poll conducted Aug. 2-17, 2021.

In the 21st century, the most prominent unions are among public sector employees such as city employees, government workers, teachers and police. Members of unions are statistically mostly older, male, and live in Northeast, the Midwest, and California. Union workers average 10-30% higher pay than non-union workers in the United States after adjusting for individual, job, and labor market characteristics.

Peak union membership was in the 1950s. Even though numbers today are much smaller, American unions are still a factor in politics. Their influence is most impactful about issues such as immigrant rights, environmental protections, trade policy, health care, and living wage campaigns.  In some areas, cities and states are trying to lessen pensioner obligations owed to union workers who retire in the future. It would be an understatement to describe it as a complicated issue. Research suggests that the rise up income inequality in the United States is partly because of the decline of the labor movement and union membership.

Keeping with the spirit of Labor Day

No matter what your thoughts or opinions are about unionized labor, the fact remains that the purpose of Labor Day was to take time out to recognize your contributions to America, no matter what you do. If you’re one of those people who finds yourself working or pushing all the time, here are a few things you might want to keep in mind:

You can only get so much done in a day. If you don’t make time to eat, sleep and take care of yourself physically, you’re not going to be functioning to the best of your ability.  This includes balancing your obligations. Learn to say “No” sometimes. Evaluate the items that make up your workload and constantly keep them in order of priority. Remember that you just can’t do everything for everyone.

It doesn’t seem likely, but studies show that taking things more slowly makes you more efficient and more productive.  This approach applies to everything. Overall, multitasking is as inefficient as rushing for several reasons including that you constantly have to refresh yourself about each task you’re juggling. Rushing and multitasking both add to mental fatigue and stress levels.

Sometimes it’s more important to recharge yourself instead of your phone, your tablet or your other devices. As wondrously important as those things can be, your relationships with the people in your life are always more important. So, if you’re going to use your phone or other device to call somebody, then definitely plug it right in.

If it’s hard for you to take even 15 minutes away from when you’d typically be working, ask yourself why. Do you feel guilty for some reason? Are you avoiding something else? Do you feel like you have something to prove? There’s no right or wrong answers. You just have to be truthful with yourself, and then give yourself the compassion and understanding you’d give anyone else you cared about.

Celebrations, traditions, rituals and routines are an important part of life. They give meaning and purpose to existence. Labor Day may not be a holiday you knew much about, and you certainly aren’t alone in that. But now hopefully you understand it at least a little better.

Instead of just completely ignoring the purpose of this holiday, take time to acknowledge and celebrate your own contributions to the world around you. Appreciate your own efforts.

Remember that even if you don’t labor for pay, your efforts still have value and matter. It can be hard to remember that when you don’t get a paycheck.

What do you consider a contribution you’ve made to the world? What is a memorable or meaningful job you’ve had? I’d definitely like to know. Please reach out to me at frominhere@gmail.com and let me know. You just may receive a gift for taking the time to do so.

1 thought on “What the heck is Labor Day”