When you’re a disabled single parent of 3 kids, with 3 dogs, 2 guinea pigs and 1 fish in your household, what’s something you can do to enhance your life?

Well, the animal shelter gave us an age of around 8 months old, so she’s technically a kitten because she’s less than a year old.

‘Stray’ cats are ones that have been socialized to be around humans. Usually, they at one time were pets, and they became lost or were abandoned – which, by the way, is a despicable thing to do. ‘Feral’ cats are ones that have had extremely limited – or zero – interactions with humans.  They’ve reverted to a wild state and usually fear people.  ‘Semi-feral’ basically means it’s accustomed to depending on humans for providing food and shelter.

It’s possible for feral kittens to become house pets, with good socialization to humans. Adult feral cats can’t become pets.  … If you find an adult feral cat, don’t try to turn it into a pet. This ‘semi-feral’ one my family got from a local animal shelter.

After one of my daughters asked me about the possibility of adopting a cat from a shelter, after I laughed, we talked about it a couple of times. I discovered that she’d actually been looking into it pretty seriously.  She was on a social media page for the Town animal shelter frequently, looking at pictures and reading cat bios. Foster situations and permanent adoptions were both needed. She had already discussed it with her sister so both my daughters were enthusiastic about the idea. My son was also on board with the rescue cat concept.

The first cat pinpointed was diabetic and needed to be injected with insulin twice a day. He was in a foster situation already and looking for a permanent home. I couldn’t see that level of care being sustainable in our family, but I quickly decided I was willing to support some type of serious effort.

With my permission, my daughter filled out an application. We had to give multiple references, who were all contacted. I interviewed over the phone with 2 different people at the shelter. The town requires that everybody in the household be present to meet the animals. Given my physical disability, they were willing to let me be there by FaceTime.

The staff at the shelter were very conscientious about maximizing precautions and minimizing expectations. As one put it, “They’ll probably never be snuggly lap pets.”.  We were not deterred. Even if the cat never became a cuddly one, the goal was to improve its quality of life. Living in the shelter was technically safe, but it was a stressful environment.

The shelter had a few semi-feral animals deemed candidates to foster or adopt. Fostering gives a family 30 days to have the cat in the home and decide if it’s a workable situation. My kids picked the one they wanted to foster with a hope of adopting it at the end of the 30-day period. She’s a very sweet looking cat.

And she’s blind in one eye. 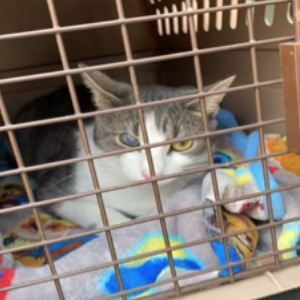 Even though the town has a veterinarian of its own, I insisted my children take the cat to the vet office our family has been using since I was a child. He gave her a clean bill of health and verified what we’ve been told about her eye not needing surgery or eye drops.

After the first of the phone conversations with one of the dedicated staff at the shelter, we started gathering about of information about how to best give whatever animal that would be chosen the best chance at finding a new permanent home with us.

Have a Dedicated Cat Room

When you bring your new cat home, it’s suggested you have a room ready where she can most quickly feel safe. We have a room on our second floor that isn’t really used these days, so it was easy to decide that it would become this safe space for our new resident.  The night before a cat was to be selected and move in, the room was outfitted with dishes for food and water, a litter box, a scratching post, and a couple of toys.

There’s a TV mounted on the wall and there are 2 small couches so my kids can comfortably hang out in this space and talk on their phones or put on the TV quietly. It’s hoped that the cat will gradually adjust to being around them. They’ve also each left an article of clothing on the floor so hopefully she gets more comfortable with their respective scents.

Food can be a helpful tool

Every source of advice indicates that Food is key to earning a cat’s trust and – fingers crossed – affection. Cats reportedly will domesticate themselves for a steady source of food. We have the same cat food used by the shelter, so our new resident didn’t have to adapt to a new diet along with the other changes in her life. She’s only been here a week but hopefully we can gradually give her other enticing foods.

My daughters report that the cat stares at them. They have enough experience with dogs to know that eye contact can be an aggressive act to animals. Just as with canines, if you unintentionally find yourself in a staring contest with a cat, experts say to calmly blink and turn your head away to show you don’t mean to threaten them. A cat can definitely hurt you, but not as badly as a dog can.

We found this repeated by everywhere from everyone. Of course, it makes sense. The cat will come to you only when she feels safe. To begin petting you’re supposed to let the cat come to you and then she can initiate whatever contact she feels comfortable with. Semi-feral cats take a lot of very gentle encouragement. Letting them approach you logically builds trust.

The most important thing when adopting any animal is Patience. Acclimating them to a new environment is something that takes time.  Cats are notoriously independent and cautious. You need to let them have their space and learn that they are safe in their new home. We’ve had a domesticated pet cat before, so we do have something of an understanding about at least that type of cat.

Do you have any cat advice?

I know a lot of people who read my blog have cats. If anyone has any advice or stories to share, please email me at frominhere@gmail.com. You really want this to be a happy permanent home for Dunkin’ … yes, that’s what we named her. We love Dunkin’ coffee and I think we already love Dunkin’ the cat a little, too.