How did the United States end up with an Electoral College system?

The 1787 Constitutional Convention was held in Philadelphia. One of the important things they were trying to figure out was how to elect the President and Vice President.  Imagine how it was going from being under the absolute control of a King to … what? It was a huge decision. If it all fell apart, the new nation could quite literally be back under control of the British monarchy again. As the King George in Hamilton says: 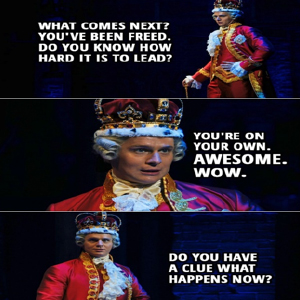 The delegates to the constitutional convention came up with 4 options:

Just like in government today, the people in politics couldn’t agree on the best way to get it done. Eventually, the Electoral College was a compromise developed by committee.

The Electoral College let the states pick the voting methods for “electors.”  Those individuals in turn would meet and cast their votes for President and Vice President.  That meeting happens weeks after the general election. A candidate needs 270 of the 538 total electoral votes to win. States are allotted electoral votes based on the number of representatives they have in the House, plus their 2 senators. Electors are allocated according to the population of each state. Even states with smaller populations are constitutionally guaranteed 3 electoral votes (1 representative + 2 senators = 3 votes).

This gives some greater weight to smaller states. It also kept members of Congress from picking a President unless there wasn’t a clear winner.

Are there Electoral College rules?

Yes.  Article II, Section I of the Constitution explains the basic Electoral College rules. A majority of electors who cast a vote are needed to elect a President. Members of Congress or people holding a United States office can’t be electors.  Electors can’t pick 2 candidates from their own state. Congress decides when the electors meet within their states.

Each state Electoral Colleges produces a sealed vote. All of the sealed votes are sent to the Vice President, acting as President of the Senate.  The envelopes are opened in front of Congress and counted. If there is any disagreement about the final vote count, the Senate and House meet separately to decide the issue. A majority of the members of the House and Senate have to agree to disqualify any votes as submitted.

If there isn’t a majority winner, the House would decide on the President and the Senate would select a Vice President.

When do electors in each state actually meet?

The political parties in each state choose people to serve as electors from that state, under rules set out and approved by state legislatures. The 23rd Amendment changed the system by adding 3 electors for the District of Columbia, which isn’t a state and doesn’t have elected members of Congress, so the usual guidelines don’t apply to it.

On Election Day, people vote for a presidential and vice-presidential candidate and a slate of electors that represents those candidates, though names of the electors don’t appear on the ballot. Under current federal law, the electors of each state convene on the first Monday after the second Wednesday in December, so this year that will be December 14.

The process of nominating electors is set by each party in each state, so it varies. Generally, it happens one of 2 ways.  Before the election, political parties either choose electors at their national conventions, or they are voted for by the party’s central committee.

Each state group sends its endorsed, official vote count certificate to the Vice President, who is also President of the Senate. A copy also goes to state officials, the federal court that had jurisdiction over the state capital area, and a federal archivist. The vote certificates have to be received in Washington by December 28.

When is the Electoral College “election”?

The new federal Congress gathers together for the official Electoral College vote count. It usually happens on January 6. The Vice President opens the vote certificates. The certificates are passed then to 4 members of’ Congress, who tally the votes.

If there is a majority winner with at least 270 electoral votes, and there are no objections officially filed by members of Congress, then the Presidential election is certified and ended. If there isn’t a majority winner, the election goes to Congress to decide.

If the election goes to Congress, the House picks the President and the Senate picks a Vice President. Each state delegation gets one vote in a House run-off election, and the top 3 presidential vote getters in the Electoral College are on the ballot. A candidate has to get a majority of the votes to win. In the Senate, each member gets a vote, with the top 2 vice-presidential candidates on the ballot. A majority is required to win. It’s all very complicated and yet also simple because the procedures are clearly set out.

What happens if an elector votes for a different candidate?

Sometimes an elector won’t vote for the candidate he or she was pledged to represent. A person who does that is called a “faithless elector.” States can legally punish faithless electors with fines and jail time.

In the history of the Electoral College, there have been more than 150 faithless electors. It is something taken very seriously, and there are procedures in place for dealing with it.

The electoral college almost always operates with a winner-takes-all system.  That means the candidate who receives the most votes in a state then gets all the electoral votes in that state.

So, for example, in the 2016 presidential election, Trump beat Clinton in Florida by just 2.2%. He then received all 29 of Florida’s electoral votes, which were extremely important. Clinton won the popular vote overall. But small margins in some key states meant that Trump was able to win several swing states and thus win more electoral college votes.

Modern media loves to predict outcomes in elections. Don’t let early exit polls that are reported keep you from voting because they make you feel like your vote is irrelevant.

Use your voting power’

Election season can be overwhelming.  There are endless ads and arguments everywhere we look. It can really feel like your vote doesn’t matter. Your vote does matter! Keep a level head and cast it knowing that your participation makes you a part of the peaceful transition of power that is a hallmark of this country.

Are you still deciding who you’re going to vote for? Remember that who you vote for is your business and nobody else’s. You don’t owe anyone an explanation or apology. 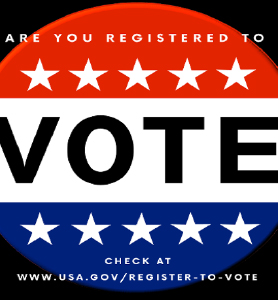 2 thoughts on “The Electoral College and the Presidential Election”