In my home, we have 3 dogs. They are a source of joy and laughter, and sometimes of intense worry. 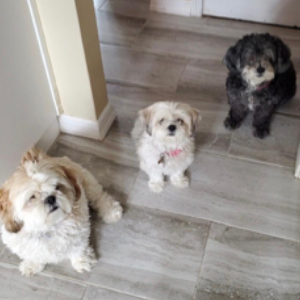 Having 3 dogs is like having 3 toddlers living in the house. They are wonderful but they make you crazy too. The past couple of weeks have been particularly stressful with them.

Madison started throwing up a little a couple of times a day. My daughters took her to the vet. Diagnosis? Pancreatitis. Scary stuff. The vet told me her numbers were low, which was apparently a good thing. He told me he expected her to make a good recovery. After about a week she was able to come home. She has to eat a very low fat diet, and we are all watching her intently.

Madison joined our family when she was 2 months old. I have had the pleasure of having many, many dogs in my life, and none of ever been quite like her. She has always had a quiet energy that is very un-doglike. She has always gotten along with every animal who came through our home. Other dogs, Guinea pigs, rabbits, chickens, a pig, turtles, a cat … Madison takes it all in stride.

We got her from a breeder in Pennsylvania, over a 3 hour drive from here. I remember on the ride home in a minivan with 3 young children, Madison sat in the back, very well behaved. We stopped a couple of extra times so they could walk her on a leash. She sipped water from a water bottle that one of the kids held for her. She was relaxed and seemed very happy, wagging her little tail with excitement but still behaving herself like a lady. As she grew up in our house she never chewed the furniture or was destructive in any way that is typical of puppies. She was always just so Good.

My son was 4 years old when Madison joined our household. I think Sabrina was about 6 and Amanda was not quite 9. As they all grew up together, Madison played with her friends and absorbed the typical tears that kids cry. When the terrible day came that my husband never came home again, Madison absorbed a river of tears shed by all of us. For months, you could tell that she was looking for Chris in the house and out the windows.

She had the habit of watching out the dining room window at front of the house starting at around 6:30 PM, which was the earliest he would typically arrive at home. On occasion he would arrive home as late as 9 PM, and she would monitor the window until he returned. It always amazed me that when he left the house with a suitcase because he had a business trip, Madison somehow understood not to look for him. There had been no cue like that on the day he was killed, and so she kept looking for him.

During the days that followed and the parade of people in and out of our house, Madison was her usual well-behaved self. But every night around 6:30, for months and months afterwards, she sat vigil at the dining room window.

I think anybody who is had a dog – or a cat – probably understands what I mean when I say that pets are members of the family. We worry about them just as much. Madison threw up again two days ago. We are hypervigilant to see if it happens again, because if she does, she has to go back to the vet. I am not embarrassed to say that the prospect of that in this situation is frightening.

Our littlest dog, Samantha, has a complicated personality. She’s going to be 6 years old this month. When she joined our family, she was about 2 months old. At less than a year old, she carted off a closed bottle of Advil that somehow had fallen on the bathroom floor. While ensconced in her hiding place under a living room chair, Sam gnawed through the hard plastic bottle and chewed up a bunch of the orangey tablets inside.

I noticed her standing in the middle of the living room floor with an orange discoloration staining the white around her mouth. As I tried to think what could have caused that, she threw up. Orange.

“Who gave Sammy Cheez-its?” Another round of denials.

Samantha threw up again and I frantically tried to think of something else orange that she could have eaten. It popped into my head that Advil tablets had a dark orange coating … I remember telling my oldest daughter to look under all the furniture. With my disability, it was not something I could do. Amanda discovered the chewed up bottle of Advil. In a panic, I called the vet. He told me that Ibuprofen was toxic to dogs. My father and my daughter rushed her to the veterinary office. When the veterinary doctor called to update me about her status hours later, he solemnly told me she was deathly ill, and that I should prepare my children because her chance of survival was so slim. She was such a tiny puppy – she weighed about 5 pounds at the time.

Fortunately, her fierce spirit combined with the skills and dedication of an excellent veterinarian, kept Samantha here with us. It didn’t be the only medical drama she would face, but Sammy’s overdose led to issues that still make us worry. I’ll share the rest of that another day. The end result is that Samantha has anxiety issues, serious ones. If she knows you, she will cuddle up next to you for hours. If she doesn’t know you, or anything about you makes her nervous, she will hide somewhere and bark for hours and hours. And if you’re Chloe, Samantha will randomly decide to bully and dominate you for no apparent reason, even though you’re more than twice her size.

Chloe Bella is the youngest of our 3 dogs. Like a typical third child, she is the most easygoing of them all. She absolutely adores dog toys. She almost always has one in her mouth, under her, next to her. She seems to leave a trail of them everywhere she goes, like a little kid clutching a blanket and a stuffie.

Chloe finds more joy in being a dog than any other dog I’ve ever known. She loves any and all dog toys. She delights in rolling around on her back, all 4 paws kicking in the air. If you ask her for a hug, she will stand up on her hind legs and wrap her front paws around your neck. 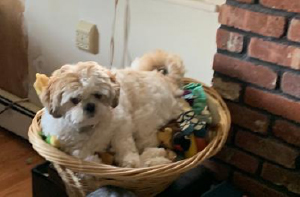 Chloe relaxing in her toy basket.

With Madison, we are increasingly aware of her mortality. We depend on her stable, dependable and loving presence in our family. Yes, she’s “just” a dog. But if you’ve been blessed to have a special pet in your life who is more than just a domesticated animal, then I know you totally understand what I am trying and failing to communicate here.

Each of our dogs has a distinct personality, and plays a different role in our family. Don’t let anybody ever tell you that your 4-legged friends are “just” animals. I’d love to hear about your furry family members! 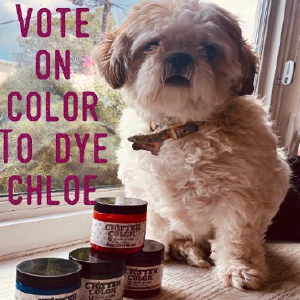 The winning color was: 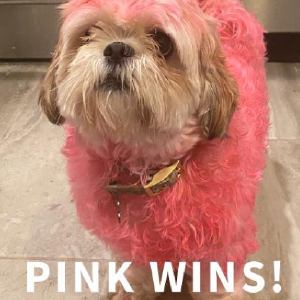