How much do you really know about live-in physical rehab places? About nursing care facilities? As a person who has lived with multiple sclerosis since 1999, I unfortunately know a lot. Too much.

To begin with, there are 2 basic types of physical rehab centers – acute and subacute. In this post I’m going to talk about sub-acute physical rehab, which is more common. Subacute rehabilitation is less intense than acute rehabilitation. Patients in a subacute facility generally only receive about two hours of therapy per day, and it is usually a combination of physical and occupational therapy. Think of physical therapy as primarily from the waist down, and occupational therapy as mainly from the waist up. Additional time is allocated for speech therapy, if needed. Subacute rehabilitation is typically housed as part of nursing home centers. Make no mistake about it, if you need the therapy, it can be exhausting.

I have spent close to a total of 22 months of my life living in physical rehabilitation centers. The first time I was in a subacute rehab center, I was 32 years old. It was terrible. Almost everybody in these centers are senior citizens, so you can probably imagine how out of place I felt.

In 2007/2008, I spent about 8 consecutive months in a physical rehabilitation facility. My children were very young. I mean very young. They were approximately eight, five, and three. My husband would typically bring them to visit me on the weekends. The other residents were thrilled to see my children, especially because very few of them ever got to see their own children or grandchildren. I would often try to meet with my kids in the community room for at least part of the visit, so that more people could see the kids.

I vividly remember my middle child, who was about five years old at the time, curling up in the bed with me in my room and crying when it was time to leave because she desperately did not want to go. It used to even make some of the toughest staff cry.

During the week, my husband would get home from work and spend time with the children. After they were all asleep, he would drive the half-hour to get to me. That would make his arrival time at the rehab center long after visiting hours had ended. He quickly worked it out with administration because unless they wanted to call the police every night, they had to come up with a plan to deal with him. The decision reached was to just let him be. Chris would often stay with me until after midnight or 1AM. He would then go home and if he was lucky, get maybe 5 hours sleep before heading to work in Manhattan in the morning. His support was a huge factor helping me stay sane during the long ordeal.

Each time I have been at physical rehab, it was unbelievable to me how many people had very little or no family support at all. No family, few friends, very little support of any kind. In subsequent years, when I was stuck for shorter visits in physical rehab places, I discovered that my experience in the early times was not an anomaly. People don’t like to take time to visit those in physical rehab, or in nursing homes. These are not comfortable places for the residents or the visitors. It is actually incredibly depressing. Some people are willing to visit, but since it’s not a priority for them, those visits happen rarely.

In facilities, even mostly ambulatory people were required to use a wheelchair to get around because the buildings are big. There are people who work as Transporters to push or help push wheelchairs, and make sure people get where they are supposed to be.

I will never forget the sight of dozens of people in wheelchairs positioned with backs to the wall outside their room doors. Staff would have them seated in the hallways so it was easier to keep an eye on everybody without having to go into the rooms. It was said that it was better for people to see one another. This picture is a little different from what I experienced, but it is pretty similar. 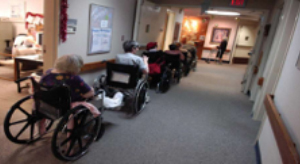 While parked in the hallways, people didn’t converse. They didn’t chit-chat. It was actually horrible. I can’t tell you how sad it was to see so many unhappy people lined up against their will for the sake of expediency. Some dozed from boredom, others repeatedly asked to be allowed to go in their rooms. Bear in mind that a room typically had two occupants, just like a standard hospital room. Although the places I was in were considered very good, they were still institutional in nature. Little to no privacy. Scarce compassion. But at least in the room there was some little bit of privacy, a TV, a phone. Books, magazines. A few things of one’s own choosing. These facilities are, however, the antithesis of individuality.

Most of the people I came in contact with who were residents of the facility were elderly but of pretty sound mind. There were separate units for people who were suffering from conditions like Alzheimer’s. I was always willing to listen to people who wanted to talk, and I quickly learned that listening was a gift that very few of them were accustomed to receiving.

During my stays in physical rehab, I had the honor of meeting and learning from multiple veterans of WW2, Korea, and Vietnam. I saw a startling number of scars from bullet wounds and other trauma suffered during war. I wish I had thought at the time to make note of last names. But I remember the first names, and the faces, and the stories.

One man in particular, Jim, a WW2 Veteran, showed me a small box in his room that contained a jumble of medals he had earned. Among the mix were a purple heart and a medal with a bronze star. He was a well-spoken man, but very, very irritable. And I didn’t blame him at all. He was routinely disrespected by the aides at the nursing home. He was disrespected by his own sons and daughter, who very rarely ever visited him, even though they all lived within less than an hour’s drive. I wondered if he had a poor relationship with his kids – if they had good reason for not wanting to see him, if he had been a bad parent or violent father. When I had one opportunity to speak with his daughter, I mentioned that her father was going to be happy to spend time with her. She responded that she really ought to visit more often, but she was busy and her father always wanted to talk about boring things.

Jim had been a widower for many years. He was trapped in a place he did not want to be, by health issues that were not of his own making. He just wanted to talk. Nobody cared, and it wore on him. Why wouldn’t he be irritable?

Ed was a bright guy who had gone through a terrible experience. He retired from UPS early and took a part-time job at a local auto supply store. There was an accident in the store and his leg was badly injured. Complications set in and the end result was the amputation of his leg just above the knee. He was a busy guy, planning a retirement that was going to include spending time on his boat and exploring little towns upstate with his wife. Instead, he ended up with a serious and permanent disability. Ed had a reputation at the rehab center for being nasty to people. I found out that he wasn’t nasty at all. He was actually a good person, struggling with a lot of pain, disappointment, and frustration. Nobody ever asked him how he was doing and really meant it. Making a medical inquiry is not the same as making a human inquiry, and actually caring about the answer in more than just a clinical way.

The staff at the subacute rehab places where I spent time could basically be divided into four categories. About 25% were pretty good people, and of them, about 10% seemed to really care about the residents. Another 25% were clearly not nice people. Of that group, I would say at least 15% were openly hostile to those under their care. The other 50% of the staff were relatively apathetic. It was just a job to them. In one way, I can actually understand that; it would be difficult to get emotionally involved in this type of work every day. But in another way, it is a completely unacceptable attitude. The residents are people. Not things. I heard people spoken to in ways that upset me so much I can still remember a lot of incidents vividly. When somebody is in one of these places, make no mistake about it, they are Helpless.  When the family of the resident or patient is not very involved, the level of care suffers.

Some of you may be wondering about activities providing at rehab centers and care facilities. I will definitely detail that in another post, another week. I will also give you detail about a day and a week of life in one of these facilities.

I have told my children several times that despite my disability, I will do anything and everything possible to always stay in our home. Being parked in a care-type of facility is like being thrown into death’s waiting room. I know that sometimes it’s the only option people have available to them. Make no mistake, even in the most dressed up in facilities, the residents are still basically incarcerated. Please don’t forget about them. Don’t let it be a case of “out of sight, out of mind.” 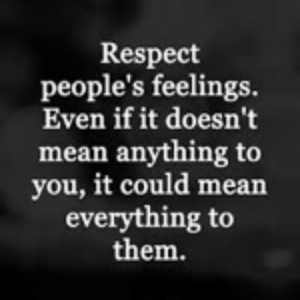 2 thoughts on “My experiences in physical rehabs and nursing homes”