My daughter Amanda recently wrote an assignment for her college English class. She had to write about a place that had special meaning to her. I was surprised when she showed me what she wrote, and it was about our backyard pool.

We live in Nassau County on Long Island in New York. The house we live in is set on a very standard 60 x 100 lot. The pool is big in proportion to our backyard. You’d never be allowed to install one this size now, because rules and regulations in our county have changed over the years. Fortunately for us, since the pool was installed by the owners at the time with all the proper permits and procedures, the pool itself is legal. That was a critical factor we looked into extensively before purchasing the house.

I, personally, didn’t grow up with a pool in my backyard. In fact, my husband taught me how to swim when we were dating. My access to water in which one could swim was very limited.  It was not something I ever excelled at doing. In fact, when I was a kid I almost drowned in a hotel pool in Pennsylvania while on vacation with my family. So, I had a serious level of caution around the water. Ok, not caution so much as Fear. Big time. Chris spent a long time coaxing me to allow him to teach me how to swim. I was about 18 years old at that time, but it was scary.

His family still had an above-ground pool when I met him, and I used to joke that he was a real, true Pisces – you know, the zodiac sign of the fish. It was his birth sign, and it was so fitting because he was totally at home in the water. Years later, when we were house shopping and we stepped into the yard of the one we ultimately chose, I could see from the expression on Chris’ face that the pool had him totally decided. Don’t get me wrong, the house was great. The swimming pool, though, was extraordinary.

When I was growing up, my family’s backyard was not big enough for a pool, and even if it had been, they couldn’t have afforded one. I can also imagine the arguments that would have happened about the pool maintenance … yikes. Anyway, at least once each summer we would typically make a trip to Candlewood Lake in Connecticut. We always went with my parents’ best friends and their daughter, Paula. This is a picture of me and Paula at the Lake. I’m the one on the left, staring at the camera. 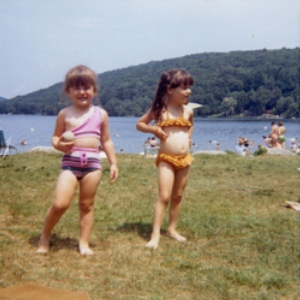 I think we stopped going to the Lake when I was about 12 years old. My mother had health issues that made the drive impossible. The memories I have of those trips to the Lake are good ones, though they are understandably muffled by time. I only have maybe 6 photos that were taken at the Lake in the 1970’s, and none of them are even close to being as good as the memories.  The biggest memory is that we were happy to go, and had such a good time while we were there. I wish my family had been the kind to have a longstanding family tradition of visiting the Lake in the summer – a tradition that I could have passed on to my own Kids. But that is just not the way it all worked out in my life.

Chris’ family backyard had an aboveground pool, as I mentioned, and not long after we started dating, his parents took it down. The structure was wood, as was the elevated deck that encircled it. I vaguely remember that some big problems developed concerning the wood. Chris wanted to fix it, but his father had enough of the aggravation already, and they dismantled the whole structure. It irritated Chris for years. Needless to say, when we were house shopping, a pool was on the ‘wish’ list. It wasn’t a ‘must’ but it was a solid ‘wish.’ We looked at a lot of houses, some with pools and some without.

I didn’t exaggerate when I told you how much of an impact the pool had on our home selection. Once we reached a sale price agreement with the sellers, the  transaction moved forward quickly. At the time, we had just our first child, and she was not quite 2 years old. The people we bought the house from had adult children who had long since moved out. I arranged to meet with a representative from a company that installed childproof pool fencing, on a date that fell a couple of weeks before the house closing was scheduled. I actually ordered the fencing and we had it installed one day after closing on the purchase of the house. 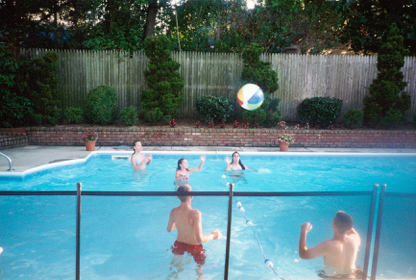 Chris did his first maintenance of the pool the day after we moved into the house. Because of where we live, our pool would typically be open from May till the very beginning of October. After the first year we did hire a pool service but even so every single day Chris would be out in the yard at some point using the handheld skimmer on the water, pulling out the tiniest particles of debris that nature would deposit on the surface. Often, he would get home from work and greet us all, then deposited his suit jacket on a kitchen chair. He would head out back with his shirt sleeves rolled up and be skimming the pool as he decompressed from the stresses of the work day. He spent a tremendous amount of time in and around the pool with our kids.

Don’t get me wrong… I enjoyed the pool in our yard when I was physically able to use it. I remember wistfully all the nights Chris and I were out by the pool with the baby monitor at hand, enjoying time with each other while the children slept and the world was quiet. I have great memories of playing with the kids in the pool, and of bringing snacks out to them by the pool. These days my enjoyment of the pool is entirely visual – I enjoy the objective beauty of it, and observing the happiness it gives my kids.

Obviously, many things have changed around here in the years since Chris was killed. Of course, the pool itself remains. And it requires constant upkeep. In 2014, I had to have the liner changed. I’ve had to deal with getting a new pool pump, and in 2016 when the pavers replaced the concrete, I had the diving board and slide from the 1970s also changed. The gentleman who took care of the pool retired, and I had to find a new pool service. A couple of years went by when the kids barely used the pool at all. Yet, it still has to be maintained. With the impact of the pandemic, my kids have developed a new appreciation for the luxury of having a pool in their backyard. I actually opened it several weeks earlier this year for them.

Of course, they don’t play together in the pool like they did when they were children. But they each enjoy it in their own way. And now my 19-year-old has been showing an interest in the more adult appreciation of having a beautiful pool in the yard. As she wrote,

“There is something very peaceful about skimming away any little debris that has fallen into the water, while listening to the soft sounds of the bubbles generated by the pool filter. The pool is surrounded by beautiful plantings and flowering bushes of all types. Dotted here and there are whimsical things such as sparkling pinwheels and little ceramic creatures whose limbs move in the breeze. There are potted palm trees and rose bushes that add a tropical flair to the setting. A few years ago, a hot tub was also added, which makes the backyard even more of an oasis for me.

In these times of social distancing and societal stress, I am acutely aware that I am so fortunate to have such a peaceful retreat from the craziness of the world. When the day is too hot to bear, there is nothing quite like the refreshing feeling of thewater closing over me when I careen down the slide or launch myself in from the diving board. An hour spent drifting across the surface of the water on a pool float hits a reset button for my day, leaving me recharged and ready to go on.”

When I read her words, I was struck by the similarity to things her father had said to me often. She was only 12 when he died, and not privy to those conversations. I was discussing this with her after I read what she wrote. She related to me that she remembers being in the pool and waiting for her dad to finish whatever he was working on in the yard, yelling for him to hurry up, that the leaves in the flower beds didn’t matter. But now she has a different perspective. The yard around the pool is part of the experience of the pool itself.

It’s not about the pool experience, or in my case, about the Lake experience when I was a kid. It’s about family experiences that define parts of your life, and end up contributing to the person you become. 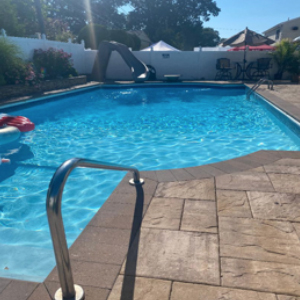