I still can’t get used to you not being here. There was never a guy more cut out to be a Dad than you. See, I remember how you didn’t like to be called a Man. You said it was too serious a word, too full of itself.

The girls went to the Cemetery this afternoon. For years they didn’t want to go. I think first it was hard to have to be with other people when they visited. You know how awkward cemeteries are. I told them how you often said you didn’t like Cemeteries. And I never pressured them to go, although I always offered a way for them to get there. But that would put them there with other people, and magnify the awkwardness. Since they can go together the two of them with nobody else (unless their brother wants to join them), they have gone several times now. A couple of times I ordered flowers from the local florist that they picked up on the way. The last couple of times they wanted to choose the flowers themselves at a florist near the Cemetery.

Nicholas didn’t want to go today. It’s amazing that he had just turned 8 when you were stolen from us, and now he’s 15. He’s taller than 5’ 7” now, and it amazes me how quickly he is growing up all of a sudden. I am painfully aware that he lacks a male role model in his daily life. It worries me.

It’s hard for any kid to grow up without a Dad, but my situation with the M.S. definitely compounds it for them. I can’t take them away for the weekend, or to a ball field, or to the mall, or to the park or even out to dinner or brunch. It feels like a terrible failure on my part. They deserve so much better.

Neither of us have family to really consistently fill the gaps, and I am acutely aware that the kids miss out on so much. A Mom who cannot walk or drive or go anywhere with them is barely able to be a Mom, let alone fill the gap of a missing Dad also. I can’t be one of the super single-parent Moms.  So, I worry to the point of madness.  The frustration of not being able to do for them is overwhelming at times.

And above it all, the irony is tragic also. So many fathers choose not to be involved in the lives of their kids. When you were here you were involved in everything with them.  I remember that time Amanda was in a talent show at school and you were determined to not miss it. You managed to rearrange a huge compliance meeting, took the Long Island Railroad to the train stop closest to the school. You ran in the snow in your suit and dress shoes, all the way from the train station, juggling your briefcase and the other things you were carrying. I was sitting in the front of the auditorium and sensed when you walked in the back.  I looked over my left shoulder and there you were, slipping down the aisle, snow melting and glistening on your wool overcoat like little diamonds.  You dropped into the seat I had saved for you, bringing an aura of ice cold temperatures and the faintest scent of aftershave from early that morning and snow. I remember thinking it was funny that I could detect aftershave and meanwhile you had your usual serious 5 o’clock shadow on your jawline. You made it just in time for Amanda’s performance.

I remember the Christmas you hunted down a Santa Claus sack and put 3 toys into it, one for each kid. Sabrina’s gift was a wooden pull-toy like she had when she was a year old. You attached a big label on it that read ‘Baby Sabrina.’ After the kids went to sleep, you propped the ladder against the front of the house. Juggling the Santa sack, in the dark, you scrambled up the ladder, and artfully draped the big bag on the edge of the gutter. It peeked over the front edge of the house just enough to be visible if one looked. In the very early hour of the morning you created a loud crashing sound. To this day, I don’t know how you did that. You dashed back into the house and went upstairs, calling the kids on your way “Did you hear that noise on the roof?”, “What was that noise on the roof?” Of course, they all woke up and raced downstairs. You accompanied them outside to investigate and coaxed their attention to the roof line. Sabrina of course spotted the sack, and you made a big deal about getting it down. The rest is family Christmas history.

Nick loved to watch baseball with you. He always wanted to look at your old baseball cards with you, and was full of questions about them. Nick declared he was a New York Yankees fan, just like you. In January of 2013, you started Nicholas’ spring training for the upcoming Little League baseball season. He was so excited that neither of you wanted to wait. You got out his Swing Trainer and all his equipment, and every day after work you spent forty-five minutes with him practicing his batting stance and his swing. He would keep an eye on the clock and wait for you to get home. No matter what time it was or how hungry you were, you always put off dinner until you both completed batting practice and some fielding drills. After you were gone, Nick lost all interest in baseball.

There was never a day that you didn’t make time for them. I used to joke with you that I chose the best possible Dad for my kids. And it was true. It makes your absence all the more difficult. This past year has been extra challenging, with Sabrina’s Sweet Sixteen, a world-wide pandemic, everybody homeschooling, and seemingly endless household challenges.

I try to tell myself you’re in a better place, but I’m not very convincing. I know there’s no place you’d rather be than here.

We’re still loving you and missing you this Father’s Day, 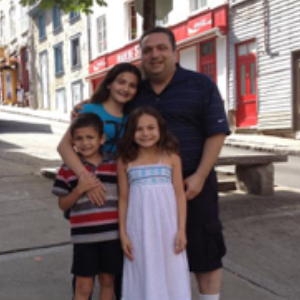 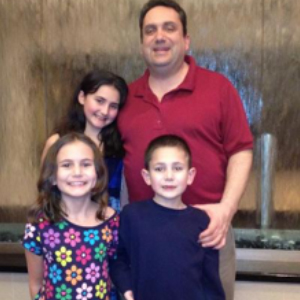