I miss my husband so much, I try to remember the worst moments of our relationship.

I do realize that might sound a little crazy, like it doesn’t make sense. But I promise you that it does make perfect sense. At least to me.

I don’t think I have ever successfully put into words the pain of losing my husband, although I have tried. It’s a terrible thing to lose a loved one in any manner at all. Illness is awful, but it does usually offer a foreshadowing that death could come sooner rather than later. There are the unavoidable fatal accidents that can happen – things like falling down the stairs, falling off a ladder, hitting your head. There are congenital but hidden time bombs people can be born with, such as a heart arrhythmia or a latent aneurysm. Some people have jobs that are inherently dangerous, and they and their families know the risks that they bravely take on – Military personnel, firefighters, police officers, etc.

A professional psychiatrist with whom I spoke while I was in a physical rehabilitation facility informed me that I should not say my husband had been killed; the doctor advised me that I should just say Chris had died. I remember very clearly that I was speechless for a few moments after his pronouncement. And then I pointed out that Chris had lost his life at the hands of another person, so he had been killed. It was fact, not interpretation.

A few years ago, I was speaking with a very kind-hearted social work counselor from the school my son was attending. We were talking about something that had to do with before my husband was killed. She told me I should not use those words. She told me I should just say Chris had died. I liked the woman very much. Often, she had good advice. Sometimes I did not agree with her about things, but I never saw the need to tell her so. Not until that conversation.

Does that look like a photo in which somebody simply ‘died’? Nope. My husband’s minivan was broadsided by another vehicle driven at about 80 miles an hour by a man who was incredibly drunk. Chris was making a left turn from a traffic light that had just turned green for the car in front of him. The drunk driver swerved around another car in the stopped cross traffic. You can see from the photo that the drunk driver hit the minivan right square in the driver’s door. All on a Wednesday evening at around 9 p.m. A few blocks from our house. Chris was on his way home from a hard day at work and never made it because he was killed by a drunk driver.

We cannot always soften ugly truth by choosing different vocabulary. This is not like telling somebody at a party that you love their dress when you actually don’t like it at all. It isn’t like calling somebody ‘not tall’ instead of bluntly saying they are short. There are times when euphemisms and gentling of words is appropriate. Neither of the conversations to which I referred involved children or anyone else at all for whom it might be wise to use euphemistic terminology. I even wondered if those two individuals thought that it would be good for me to somehow try to trick myself linguistically into thinking of Chris’ death as other than it was. Both denied that was so.

After Chris’ death, a big part of me just clicked off. I think great loss of any kind often causes that reaction. You go into a surreal state of shock. The situation doesn’t feel real, although you’re aware that it is very, very real. An influx of Mass cards and condolence flowers were a silent reminder that it was nightmarish but was not an actual nightmare. So were interactions with the medical examiner’s office, church, priest, Funeral Home, cemetery, insurance company, and on and on and on.

If you’re blessed to have children, they are immediately a huge part of what you have to focus on while you cope with the death of somebody important to all of you. My son had just turned 8, my daughters were 9 and 12. They were devastated and 100% my responsibility. When they couldn’t eat, couldn’t sleep, had nightmares, cried … it was all on me to try to listen and provide encouragement and support. As a parent, you want to be there for your child when he or she is in pain. And so, you have to manage to keep yourself out of the abyss.

I have done a lot of things in order to accomplish that goal. Meditation. Prayer. Writing. Talking. Proactive good works. Reading. Self-improvement. And remembering the worst things I can about Chris. 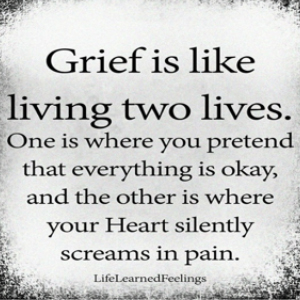 I don’t mean to try to diminish him or be disrespectful of his memory. But I’m very conscious of the fact that it’s easy to idealize the dead. I think we all know at least one person who was really awful to deal with in life, and then when they die everyone says wonderful things about them. You know it’s true. It is actually ingrained in us – “Don’t speak ill of the dead.” The silent part of that statement is “… even if he (or she) deserves it.” it’s like we give that courtesy to others in hopes that the same will be given us when we are the one who is dead.

We tend to remember the good things about people and forget the negatives, or in some way minimize those parts. I don’t think that really helps us cope, and it doesn’t necessarily do justice to the departed.

My husband was the best human being I have ever known. He was loving and fun, adventurous and kind, generous and self-deprecating. Chris was smart and successful and modest, sincere in his religious faith, and quirky in all the best of ways. But he wasn’t perfect by any means. He always had a jealous streak and could lose his temper quickly at times. He could be bossy, demanding and impatient.

He has been gone for 7 years now. I shake my head as I type that because it is so hard to believe. In my heart, it doesn’t even feel like 7 months have passed. I know it’s the truth though, because I haven’t lost my mind yet and I remain firmly grounded in reality.  I also see how much our children have grown. They are not little anymore.

7 years is not a short time. Our children are good human beings and I am as active as possible within their lives. In the time since Chris was killed, I have gained a lot of useful knowledge through 3 different Universities. I have helped a lot of different people. Although I have been basically trapped at home the last couple of years because of my disability, I remain extremely engaged in the world. Yet the hole his death left within me is still dark and echoes with the silence of grief.

It is not constant agony now. It is more of an underlying disquiet, punctuated by unexpected episodes or moments of wrenching sadness – the type that steals your breath and replaces it with nausea. It is in those moments sometimes that I try to remember the negative things. Like when I proudly served the beef bourguignon I had worked hard for 5 hours to prepare and Chris never even tasted it; he commented it looked like dog food and then he went out to pick up McDonald’s.  I was furious. Or when we were on vacation in Las Vegas … I was on a great winning streak at the Luxor and Chris persuaded me that I should put my winnings thus far in the safe in our suite. After we did that, he convinced me we should rest for an hour. He set an alarm. Can you guess where this is going? When I finally fell asleep, he turned off the alarm.  We never made it back down to the casino that night. I had recently gotten out of the hospital and he was worried that I was pushing too hard. But he tricked me and I was livid.

Do the negative memories make it easier? Of course not. But they do provide valuable distraction sometimes. They do provide a reminder that you can love someone even though they anger you sometimes, and the loss of a relationship with that much love deserves to be mourned for as long as you need to – there are no rules. 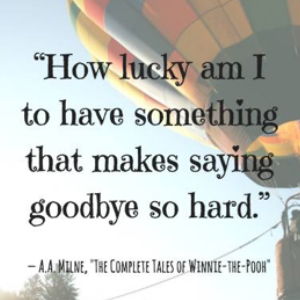