They say that there are ‘dog people’ and ‘cat people.’ I like cats, but I have always had a particular affinity for dogs. I guess that’s why my family has 3 of them. 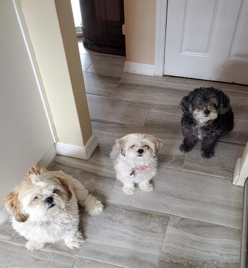 But we do have a history of welcoming other beautiful pets into our home. Currently, one of the other critters in residence is Winter, the Guinea pig. My daughters brought her home several months ago, and she has become a constant quarantine companion to my older daughter. Whether or not you like the species, I think you’d have to agree that she is really cute: 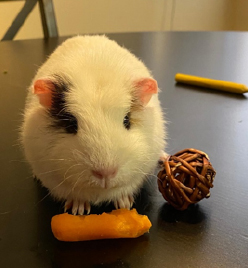 Winter is a sweet girl, but very mischievous. She currently lives with my daughter, Amanda, in a studio apartment that is part of our house. Last week, Amanda called me from her apartment on her phone, really upset. Hysterically upset.

It is amazing how human mind works. While she tried to tell me what was wrong at the same time she cried, part of my mind flashed back to the night the detectives told me my husband had been killed, and my daughters started crying in horror. Amanda kept crying and talking and I could not figure out what was wrong.  With coronavirus running among so many families in New York, I thought somebody she knew was very sick or had died of it. Or of something else.

I kept encouraging her to calm down and tell me what was wrong. I finally figured out that she was upset about something to do with the Guinea pig. Bit by bit the story came together. She lets the Guinea pig exercise by meandering around the apartment.  But she always makes sure everything is safe first, and she usually watches Winter the whole time. This time, my daughter was loading the dishwasher. She had to duck into the bathroom for a minute. Bear in mind, it is a studio apartment, so the bathroom was only a few steps away. When she came back just a couple of minutes later, Winter was gone. Amanda looked in all Winter’s favorite hiding spaces. Nothing.

Amanda had looked everywhere but in the dishwasher. She got it into her head that her chubby little Guinea pig could have somehow clambered up into the dishwasher while Amanda was in the bathroom. The dishwasher that was now running. I told her it was not likely because how would the Guinea pig scramble up the distance from the floor to the cabinet unit? Knowing she had already looked everywhere in the apartment, Amanda could not think of any other possibility. She pleaded for me to send up her siblings to help look for Winter.

It was a big ask. I had Amanda in quarantine because she had insisted on going out to see friends a couple of times and I was very positive they were not 6 feet apart at all times. I have multiple sclerosis, which is a central nervous system disorder and an immune system disorder. Social distancing is a very serious issue around here because of Coronavirus.

But Amanda’s panic was very real. So, I had my other 2 kids suit up in double masks and gloves. Had them spray each other with Lysol even. And upstairs they went. Thankfully, Winter was not a victim of dishwasher water boarding. She was also not trapped behind the refrigerator or the dishwasher. The sibling expeditionary force found its way downstairs again after an unsuccessful mission. They were all convinced that Winter had found her way into the wall through the small space next to the pipe under the kitchen sink.

Several hours later Amanda called me again to let me know that Winter had been found. Where? In the little cabinet beneath her bathroom sink. Huh?  Here is a picture of that bathroom, taken in March: 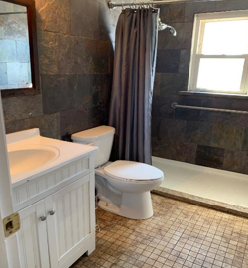 You can see 2 things very clearly from this photo. It is not a large bathroom. And the under-sink cabinet is not flush to the floor. (Get it? Flush … the bathroom … sorry).  Somehow, while Amanda was in the bathroom, Winter wandered in and inexplicably made it up and into that cabinet, and was in there when Amanda shut the doors to it.  Winter should have called Linny from Wonder Pets to come to the rescue. Let me assure everybody that Amanda really is a very responsible pet owner. And she is very devoted to all the animals in our house. She was terrified when she thought something bad had happened to her Guinea pig. 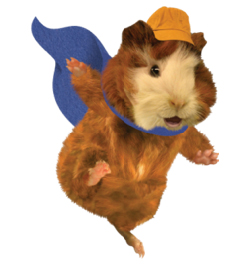 I think most of us know that pet owners tend to be very loving towards their animals.  It really is not hard to understand why. They give us endless unconditional love, attention and entertainment. In return, they ‘ask’ very little – just food and shelter and what attention we can give them. Dogs don’t steal, unless you count the occasional shoe or glove.

Our pets help us through the darkest days in our lives. We can talk to them, without judgment, about our fears and worries and grief. Many people detest the quarantining measures in the fight against coronavirus. I feel very confident saying that our pets love it. Obviously, they have no clue why people are home so much more. But you know they are so thrilled about it! They show it with every tail wag, purr, chirp, click and whatever other sound your pets may make.

When my husband was killed, our dog, Madison, patiently absorbed a million tears courtesy of me and my 3 kids. And make no mistake about it, Madison also grieved in her own way. Every night for months and months she waited by the front window at the time when my husband would have normally been expected home. She would curl up to nap under his desk. She would pace restlessly for hours.

And Madison, over the course of a few years, developed a terrible fear of my father-in-law. He was a man she had been very affectionate with since we brought her home as a puppy. But for complicated reasons she didn’t see him for a couple of years after Chris is death, and then when she saw him again she freaked out.  Not barking so much as hiding in another room to get as far away from him as she could.

Here’s a picture of me, my husband and my father-in-law, taken at my middle child’s First Communion, a little less than 2 years before Chris’ death. I think you can see there is a strong resemblance between them. Their voices also had a similar timbre. 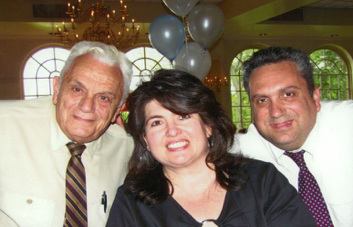 My father-in-law passed away a year ago. For all the time between Chris’ death and his death, Madison refused to get anywhere near him. The behavior was a far cry from all the years she would sit on his lap on the couch, and under his chair in the dining room. I’m not a dog psychiatrist and I’m not able to speak to them. But it’s not difficult to reason that my father-in-law reminded Madison so much of Chris that she couldn’t handle it. It somehow brought up her doggy grief.

Our pets are there for us. It’s our responsibility to be there for them as well.