My father had a Protestant father and a Catholic mother, and he was raised as a practicing Catholic. My mother was born to Jewish parents but grew up to be culturally Jewish rather than observant. So, my parents married in St. Boniface Catholic church and had me baptized there.

When it came time for me to have a religious education, my parents decided to raise me … nothing. I grew up aware of the basic tenets of both religions. We had a Christmas tree in the living room and a menorah in the window. I learned how to make glazed hot cross buns and matzoh brie. But formal religious education? None. Zero. Zilch. Instead of deciding, my parents decided to leave it to me to choose my faith.

Sounds enlightened, right? Well, it wasn’t. It was really a cop out. In one way I get it, I do understand. My paternal grandfather‘s Protestant family actually disowned him because he married a Catholic woman. And that was in the 1940s, not the 1600’s. I learned many years later, my father’s lineage in America began with the 1638 arrival of Deacon William Holton.  William’s story is too complicated to detail for my purposes here but suffice to say he was a devout and well-respected Protestant leader of his time in America. The memorial stone shown below is at the Old Westminster Cemetery, in Westminster, Windham County, in Vermont. This is a cenotaph – a monument erected in honor of a person whose remains are elsewhere. Deacon William Holton is not even buried in the Westminster Cemetery, but there is a memorial to him there. 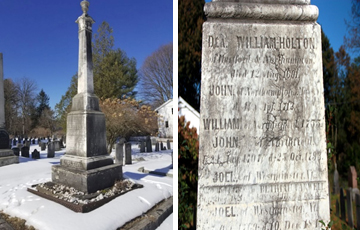 He was one of the original founders of Hartford, Connecticut. William moved his family to Northampton, Hampshire, Massachusetts in 1653, where he was an original petitioner to establish the town. He was the first deacon of the church in Northampton. He was also a member of the first board of magistrates appointed in 1665. Deacon William Holton introduced the first motion in American history for the suppression of intemperance. (Meaning he was against public drunkenness, not against alcohol consumption.  Ironic, as my husband was killed by a drunk driver).  In l656, his daughters were the brides in the first two marriages in Northampton.  This is his grave site there. 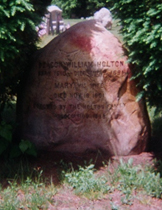 The point of this mini history session is that my father was well acquainted with how religion could divide people because it divided his own immediate family against his father’s other family members. He and my mom did not let religion come between them and were skittish about choosing one for me.

I do not recommend doing that to your kids because it was not a great experience, and it would be very easy for somebody to just ignore religion completely as a result. I remember being envious of friends who made their first communion, or their bar/bas mitzvah. (I know the ceremony for girls is more commonly called a bat mitzvah, but my Jewish grandmother and great-grandmother both said bas mitzvah, which I understand to be a more old-fashioned Ashkenazic variation, and the one I always hear in my mind).  I remember agreeing with a few of them- that it was cool I did not have to go to religious instruction classes. But I also remember being conscious of a void in my life.

Fortunately, I have always been what my kids call a nerd – Yes, they call me that. Whatever. I am willing to own it, and I don’t think they really mean it as a big insult.  So, as befitting my life-long nerd tendencies, I spent a couple of years researching different religions, plus atheism and agnosticism. I had good friends of several different faiths. But Catholicism pulled at me from the time I was about 15 or 16. I made inquiries by telephone call to the Catholic Church that would be my parish. I even walked there a couple of times to meet with a priest in person. He was terrific, by the way. He gave me reading material, answered my questions, explain the process of actively joining the faith.

But I did not have the internal courage to start the faith formation process until I was about 20. My husband, at that time my boyfriend, never ever pushed me in any direction with this. When I made the appointment to sit down with a parish priest in person again to begin my religious education, however, Chris was very supportive. As an adult I studied the catechism, met each week with a priest, attended mass, made my first Reconciliation, received First Holy Communion and Confirmation.

Chris and I were married in the Catholic Church where I had taken my religious instruction, my home parish. To this day I believe that only 1 or 2 people aside from myself knew how very seriously Chris took those his faith and our vows. I apologized to him a couple of times over the years for the way MS had screwed up so many of our plans. He told me very intensely that our sacramental vows were the most serious thing in his life, that he made them and meant them with all that he was, and MS couldn’t change that. And then he scolded me for apologizing for something that wasn’t my fault.

I admit my faith is not as strong as my husband’s was, but it is steady. The Catholic Church, just like most people, organizations and institutions, was not prepared for the Coronavirus pandemic. When first became a real concern, Catholic churches replaced the sign of peace handshake during Mass with a nod or a bow or wave. I receive communion weekly at home, but emails from my parish, diocese and Catholic school my kids attend keep me up to date about the changes.

The situation worsened; Government restrictions intensified. Churches began to close, just   after the serious season of Lent began, the real start of Easter.  The Church has taken seriously they need to reaching people, to forge new bonds of faith community despite physical limitations of social distancing. Livestreaming masses and discussion sessions with priests, tweeting of scripture passages, emailed prayers, robocalls of information and support … the efforts of many religious leaders have been outstanding. Against all this, the Church has made impressive efforts to remain in community connection with its people. Local churches have live-streamed masses and many are still celebrating virtually for Easter Sunday, allowing Catholics to join in from their homes. Prayer groups and scripture readings have been organized by Catholics on social media platforms, and for many, the Easter celebrations provide an opportunity for hope in a confusing world where now, particularly, God can feel silent. Pope Francis has offered virtual sermons and quoted relevant Bible passages on his Twitter feed, focusing on praying for those in need, reminding us that at the core of Easter is a message of forgiveness. I know these efforts are also being made by people of many other faiths as everyone tries to deal with this pandemic

Being unable to properly celebrate Easter feels theologically confusing. According to the New Testament, Easter is three days after the death of Jesus on the cross, when Jesus, fulfilled prophecy and through his death, has given the gift of eternal life in heaven to those who believe in his death and resurrection.  In the Catholic faith, Holy Thursday remembers the Last Supper when Jesus met with his disciples to celebrate Passover.  Good Friday marks the tragedy of Jesus’ crucifixion and death. Holy Saturday is a collective vigil of waiting and anticipation. Easter Sunday is the day of Resurrection, and the hope humankind can have to rise again.

Easter is the most significant date within Christianity because it really is the foundation of Christian faith; it is the fulfilled prophecy of the Messiah who would be persecuted, die for our sins, and rise on the third day. (Isaiah 53). Catholic concepts of forgiveness and repentance (symbolized by abstaining from meat on Fridays during lent and sacrificing other things we may like) are rituals with meaning, Practices such as communion and confession are significant beyond their immediate purpose. They are also part of being something greater than oneself. They symbolize community and belief.

The Catholic Church thrives on formal collective worship and ritual, a community structure. Even those who have personal issues with church doctrine can often appreciate the beauty of the traditions of the mass. The coronavirus pandemic, however, has interrupted these services, cutting short the comfort and catharsis that comes with completing them. Traditional church rituals are unavailable. Re-enactments of the Last Supper at parish churches, Stations of the Cross services on Good Friday, Holy Saturday candlelight vigils and celebration of Easter Sunday Masses … all cancelled.

This morning, I watched on the Internet as Pope Francis celebrated Mass alone in the Vatican. “Indifference, self-centredness, division and forgetfulness are not words we want to hear at this time”, said the Pope. These words “seem to prevail when fear and death overwhelm us”, and we want to ban them forever, he stated. He is the head of the Catholic Church, but I think those words are ones that apply to all humankind, including agnostics and atheists. Coronavirus does not discriminate, and neither should love. There are many types of love, and it is an emotion that we all can in our own way share. Social distancing is necessary to bring an end to the pandemic, but we need not have distance in our hearts. Love is the known antidote for that.