Being disabled can make ordinary weird moments in life even weirder.

As part of minimizing pain from multiple sclerosis add my resultant very limited ability to move, I have help 5 days a week or so in stretching and bending my limbs. Today, I was having some stretching therapy on my right arm when the young woman doing it suddenly stopped what she was doing and froze in place.

“I don’t want to freak you out … “she said, staring off into the south-west corner of the room.

I looked up from my computer tablet, where I was working on a genealogy project. Her suddenly rigid posture and alarmed tone of voice had my full attention now.

“What?” I asked, looking for clarification. She kept staring into that corner, obviously nervous and starting to fidget in place. “Melissa? What is it? What’s wrong?”

“There is a lizard over there in the corner by the wicker baskets!”

Although I couldn’t see the creature in question, I know exactly the type of critter she was referring to.

My town, Franklin Square, has a good number of small lizards running around it. They frequently are not visible because their size and coloring makes them blend into the landscape. Nature gives them excellent camouflage.

They are, technically, podarcis sicula campestris, and are distantly related to iguanas. They are commonly known as Italian Wall Lizards or Ruins Lizards. Below is a headshot of one of these lizards. I first learned about them when my husband and I moved into our Franklin Square home with our eldest child, who was not quite 2 years old at the time. We moved into our house in Franklin Square in July 2002. It was a very hot summer on Long Island. I was very glad we had chosen a house with a pool! 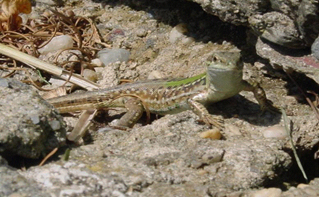 Within a couple of weeks of closing on the purchase of our house, we had a big pool party. Our friend group at the time had a total of probably about 10 children under the age of 10. The party was in the pool, on the deck, and in the house. At one point, I was in the kitchen with someone else and the kids came stampeding from the deck into the living room that was adjacent to the kitchen. There was considerable laughter and screeching. A couple of the parents on their heels clued me in – the kids were chasing a small lizard that had run into the house. It vanished on the far side of the living room, clearly benefiting from its evolutionary ability to disappear from potential predators. Even ones with mouths and fingers sticky from Italian ices and Rocket Pops.

I was horrified that some lizard creature with a long tail was running through my house. Some cursory research the next day filled me in on the little lizards, which somehow, I had not known about although I was born and raised on Long Island.  The lizards are common in Italy and other parts of Europe but are not native to North America.  Where they come from is an unusual story, but a true one. It started decades ago in a pet store in West Hempstead, another town, just on the border of Franklin Square. A shipment of the lizards was delivered to a store called Gardener’s Village in the late 1960’s.

There are three variations of the legend as to how the little buggers got released into the area:

I should make it clear that the lizards pose no threat to people or property.  They are actually useful to suburban homeowners with flower and vegetable gardens, since the lizards eat aphids, which can destroy those plantings. Beetles, wasps and other insects round out their diet. The lizards are green or brown with black spots that look like stripes on their backs. They can reach a length of 7-10 inches, but many of the ones seen are 4-6 inches long. More than half the length of these lizards is made up of the tail. The tail has a weak bone segment that is easily broken right off which is a defense mechanism because the lizards are food for birds and other small animals. If a predator grabs a lizard by the tail, the tail can break off, freeing the lizard to get away. In the years since they were released into the community, the little lizards have spread as far east as Hampton Bays in the next County, west into Queens, and even into the Bronx, a borough of New York City. That means somehow the little buggers even managed to get across the Throgs Neck Bridge.

On a hot day, if you really look, you can sometimes find a couple lounging near a lawn or front walk. They live in brushy hideaways, in between railroad ties and in other crevices, waiting for a sunny day to lounge on a rock. They may nip a human hand in self-defense, but they carry no diseases that are transmittable to humans, and their jaws are so small it’s not likely to hurt very much. Some people like them.  They hide under the small rock footwalls, bask in the sun, and are heard scurrying through the leaves. Some children love chasing and catching them, but they do not make good pets. They need sunlight to stay healthy, and since their main diet is spiders, it’s hard to keep a food supply in a home.

Tell that to the one who invaded my room.  Poor Melissa was bravely trying to control her freak out. I couldn’t even see the lizard invader, but I was trying to control my own freak out. Melissa could run out of the room if she wanted to, I didn’t have that luxury. When you’re physically disabled you are easy prey, including for things that won’t physically hurt you but will mess with your rational mind.

And then the dogs got involved. Over the summer of 2019, I spotted Chloe with the tail of one of these types of lizards in her mouth, on our deck. So, I had the bright (not) idea to see if one of the dogs could catch my lizard intruder. I yelled for the 3 of them and they all came running. Being dogs, they had no idea what I was screeching about but I sounded excited, so they were excited. Melissa tried pointing them into the corner where the lizard was last spotted. That didn’t work, although they got even more excited because we were talking loud and fast.

Melissa had the idea to get a bag of their favorite dog treats from the kitchen, and toss those into the corner where the lizard had been spotted, in hopes of directing the attention of the dogs into that corner. The dogs eagerly retrieved the beef bits but that was it.  Clearly, I thought, all of my dogs lack even basic tracking abilities.

I could not call my oldest child, the one who has freaky Doctor Doolittle type abilities with animals of all kinds, because she is quarantined within our house because she was late to understand social distancing with people outside the household. I currently cannot allow her near us. She is not at all afraid of these little lizards and would probably be able to charm it into cuddling up with her. But … Quarantine.

I called my son where he was in the other room and asked if he would help try to catch the lizard to put it outside. He informed me that he can’t deal with lizards; apparently, they freak him out just as much as spiders do… which is a story for another day.

Next, I Facetimed my middle child, who was upstairs in her bedroom. I told her the dogs were chasing a lizard around my room and I needed her help. She came downstairs right away and on our security cameras I watched her go to the main hallway and call the dogs. I figured she was getting them out of the way so she could help get the lizard. Wrong. She closed the gate to block them out of this part of the house and then went back upstairs.

And then Melissa had to leave.

I realized that this crazy hour was a good example of how life is when you’re disabled. It leaves you at the mercy of unpredictable outside forces. Obviously, an individual’s degree of disability determines how much you are at the mercy of others and unpredictable forces. I think for anybody who is disabled, there is a level of vulnerability that is at best disconcerting and at worst, terrifying, I fall somewhere in between most of the time. I keep my physical environment as safe and well maintained as possible. I am reasonably intelligent and try to make good decisions. Even so, I have had several people whom I trusted, steal from me … another example of unpredictable vulnerability.

The little lizard who decided to move in, (hopefully on a temporary basis), is certainly not a physical danger. He – or she – is not even an emotional or psychological menace. Its presence did not make me cry or shake or obsess about it to the point of being unable to do what I need to get done. It just kind of grosses me out and makes me aware that I cannot just get away from it if I want to. If it was some kind of poisonous, spitting beast like that dinosaur in Jurassic Park, I would be toast. Luckily for me, wall lizards have pretty much nothing in common with the Dilophosaurus. Here is a picture of that lovely creature, as its big screen version spat poison venom to incapacitate its prey. (On the Dilophosaurus’ behalf, please be aware that there is no evidence it did so in real life). 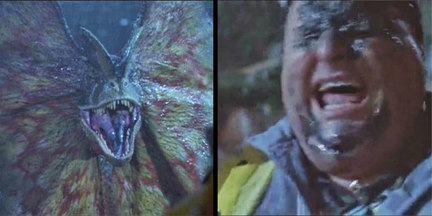 When you are physically limited by a disability, you have to learn to think about things differently then you did before you became disabled, if you were not born with the disability, of course. You have to plan for innumerable issues and contingencies, even more than the average person has to think about, like:

What will I do if my adaptive device breaks down?

What if I run out of medication?

What if there is no elevator?

What if the elevator breaks?

What if there is a fire?

Will people take me seriously?

When you are disabled, you can’t just focus on that, otherwise you’re never going to get anything accomplished. You do have to take it into account so that you can stay safe and productive. For me at least, it becomes a fact that is always in the back of your conscious mind, but you don’t intentionally focus on it. You absorb it and adapt to it, but it doesn’t define you. You live it but don’t always think about it … though sometimes it pops into sharp focus, like when a little green lizard pops into your space.

A rare sighting of the giant form of these lizards, but such sightings end when the snow melts.