I think it is safe to say that keeping 3 teenagers quarantine in a house is very similar to keeping 3 chickens trapped in a cardboard box. Unfortunately, I am now experienced with both.

I guess I better explain about the chickens first. In 2011, I opened a box delivered to our home. It contains a large white box and had a plug. The paperwork enclosed explained how to set up my new incubator. I called my husband and questioned him. Laughing, he asked if there had been a second box. I think my reply was something along the lines of “What have you done? What are we going to incubate?” He was on his way to a meeting, so I didn’t have time to ask more questions, but he requested that I wait for him to get home before opening the next box. That next box came shortly after the conversation. It was boldly labeled ‘Fragile’ and ‘Handle with Care.’

Now, we live in a suburb of New York City where there are plenty of dogs and cats and not many other types of animals. Hamsters, Guinea pigs, fish … that’s about it. But my husband got us chickens. Don’t get me wrong, chickens are great. I know people in different parts of the country even occasionally keep them as pets. But not where we live … more about that in a minute. 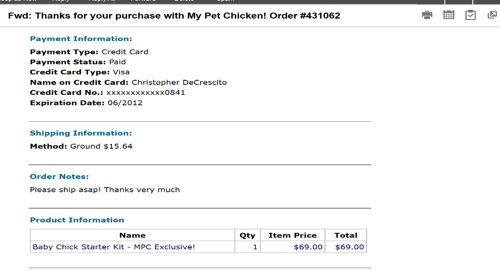 When Chris got home that night and we gifted the chicken eggs to the kid, there was a lot of excitement. The incubator got set up on the kitchen table. I had educated myself as quickly as possible about the care of eggs in preparation for hatching. I explained to them importance of the incubator being plugged in, how frequently the eggs had to be rotated, and so on. Out of the 13 eggs that came in the starter kit, 3 hatched. 3 kids, 3 baby chicks. I only remember what the kids named 2 of them – Natalie and Flynn Rider. (that last name was courtesy of my then 6-year-old son, in honor of the key male character in the Disney movie Tangled, which his sisters forced him to watch).

Fast forward through the chicken run in the basement, and the chicken coop we had to put outside when they got big enough. My husband was thrilled with the chickens and even forwarded me an email he received from the seller promoting a sale on a 25 pack of chicken eggs: 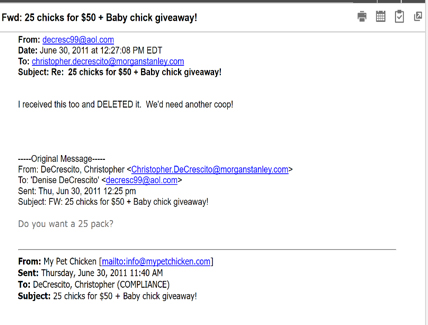 Unfortunately, one of the chickens was a rooster and he kept flying over the neighbor’s fence. My oldest child would have to constantly get him back. He crowed. Loudly. Like clockwork. Which led to a visit from an animal control officer from our area. The woman was none too pleased with the presence of our family chickens. She very sternly admonished me that chickens were not allowed in our neighborhood and told me her office had received multiple complaints. We had made a fowl foul. (Sorry, I couldn’t resist that alliterative homophone). Our chicken trio had to go, within just a few days. I tracked down an animal refuge that would take them, located in the next County.

So how to transport 3 chickens in a car with 3 children? The best I could come up with was to use a big box. And that of course is where this started at the top of the page… because transporting 3 chickens in a box was a nerve-wracking, loud, hellacious experience. Living in self-imposed quarantine with 3 teenagers is a reminder of that experience.

I have one child who is a little bit of an introvert, which likely has something to do with growing up with 2 loud older sisters. Left to his own devices, he will while away of the day on his cell phone or PlayStation. When he wants to get moving, he is content to circle our backyard, walk laps around the dining room and kitchen, or around a few neighborhood blocks.

He tends to be a procrastinator, so the long-distance learning modalities that all children are dealing with now, has been less than fun for me as his parent. He is not forthcoming about it at all, so I sound like a demented parrot:

What Google meet classes are scheduled for tomorrow?

Did you check your assignment center?

Did you hand everything in?

Did you get any grades back?

Did you make your Quizlets for today?

Did you write that paper/essay/response?

Did you read the book?

Did you take the quiz?

You get the picture. I’ll admit it, I even annoy myself with this. But if I didn’t question to keep him on track, he would procrastinate all day and try to do everything in the last 20 minutes before its due. Trust me, I speak from our experience in the first few days of long-distance learning.

But I don’t have to worry about him rebelling against the quarantining. He rebels against the schoolwork but is fine with being at home.

Teenager number 2 is handling schoolwork at home like a champ. She is organized and on top of her assignments, scheduling, workflow and work plan. Normally she is a very social person, but she has been a great sport about quarantining. FaceTime and Snapchat seem to be a big help for her with staying in touch with her friends and her boyfriend. Fortunately, they are all equally serious about quarantining themselves with their families.

She also TikToks, and even I enjoy seeing what she posts. She has posted clips from our family texting a couple of times, so I never know what’s out there, but she made me laugh so I don’t mind. (For anyone interested, she is on TikTok as @sabrinadecrescito). If you do check it out, I can assure you I am not really a bad parent. –  it just seems that way.

Teenager number 3 is the toughest isolation challenge to deal with around here. She’s too old for me to query about her schoolwork. Even though she’s a teenager she’s technically an adult and is a college student. Meeting her college obligations is her responsibility so I try not to question her about her transition to online coursework. Quarantining does not sit well with her; she is like the loud rooster trying hardest to escape the box.  I’m sure part of the problem is that she has a driver’s license and the car in the driveway beckons.

When this necessity for social Distancing began, she went through a brief, slightly manic house cleaning phase. When she wants to clean nobody does it better, and the whole house sparkled because of her work. Laid off from her job because it cannot be done from home, and with college classes not taking up a lot of time since the work is just posted online, this teen starting to get cranky fast. She went to a drive-thru with friends one night to get coffee, and I freaked out about it.  She assured me the friends had just gotten back from a trip and had been tested, but that was not the point as far as I was concerned. Then a couple of times she insisted on driving to visit her boyfriend some 25 minutes from where we live. Physically, I cannot stop her at all, and she knows it. She told me he and his family haven’t been anywhere in weeks, but that’s not good enough for me. Because there is no way for her to 1000% know that is true.

So, I made the difficult decision to essentially quarantine her separate from everybody else in our house. There is a studio apartment unit in our house, and she was banished into it. Don’t feel too bad for her about that (insert subtle eye roll here). The studio has a full bathroom and a little kitchen, and she was able to take her Guinea pig with her. Trust me, she is not exactly living in squalor. She has food and her brother has been doing her laundry for her. She still vanishes out of the house occasionally and hopefully when she does, she uses the mask and gloves I’ve given her.

But it irritates her very much, being cut off from the rest of the house. She comes around to the back of the house onto our deck occasionally so we can talk through the screen door. Sometimes the exchange can take a quick and ugly turn, as any parent of a teenage daughter would understand, I think. This photo was taken a couple of days ago, from my room in the back of the house looking out onto the deck. Envision a beautiful 19-year old young woman snarling on the other side of it. Fun. 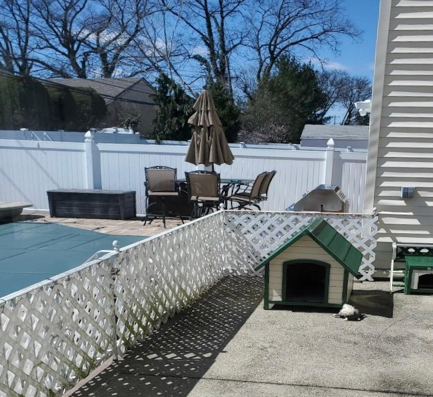 Thinking about it, that might be hard to imagine.  So maybe this edited version would help: 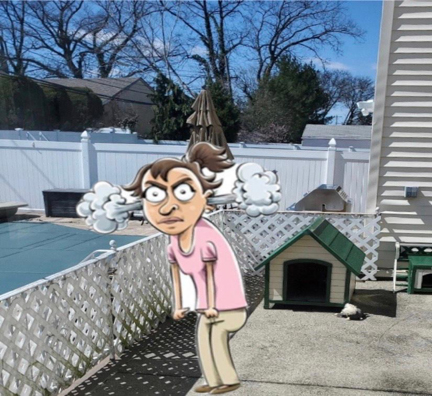 I am not trying to embarrass any of my children by sharing this information. They are the guiding force in my life, and they know it, just as they know how much I love them. But I hope that my transparency about this will help other people see that they are not alone in dealing with challenges of living with teenagers during this crisis.

Young adults, older teens like my eldest, are newly independent people, often new to experiencing college and ‘real’ jobs. The virus that has thrust everyone into a world of social isolation has slammed the door on all of that. Becoming an adult is difficult even in the best of times. For people like my oldest child it is like we gave independence with one hand and then suddenly stole it away with the other. Obviously, there is a very good reason for the change. But undoubtedly it doesn’t make it any easier to cope with.

The chickens I told you about only spent about an hour in the box. News reports indicate we are only a few weeks into what is likely to be several more months at least of this social isolation way of life. We all want to know an end date and that is something we cannot know at this point. Teenagers seem to go through an ‘I know’ stage … or year … or years. These dangerous, unpredictably turbulent times are ones they have to face without the blind trust of younger kids, and without the rational patience that most adults have developed. These days, I am definitely trying to increase my patience to deal with my teens. How is it going for you and yours?