In times of stress and anxiety, our pets can offer great comfort and stabilization in our world. Their love is unconditional and limitless. Their constancy is a blessing that we sometimes overlook. You will find I frequently post pictures of our 3 dogs. Some of you have reached out to me to ask questions about Samantha, so I thought I would take some time to introduced the trio to you all. I would love if you would share pictures of your own pets with me, and share anything you would like to about them!

I have 3 teenage children, and 3 dogs in my house. We also had a cat for about a year, but Piper the feline had to move out when my oldest daughter moved out to go to college last year. Piper was her cat, and although our human family liked her, one of the dogs was not very fond. Without her human mommy here, it was decided that Piper would be happier moving in with another family in our town who very much wanted her to be part of their family. 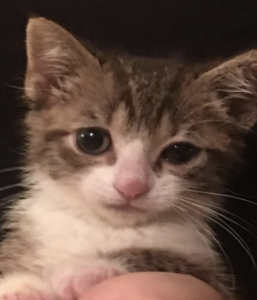 So, although the human child is back, there are no plans to get another cat. As anyone who has pets can attest, 4-legged fur babies become a very important part of the family. (No offense to the dogs out there who are missing a limb).

On any given day the dogs make my home into something of a 3-ring circus. And that’s putting it mildly. The oldest of the 3 is Madison Matilda. She is going to be 11 years old on May 3rd this year. She is a shi-tszu/poodle mix who joined our family when she was 2 months old, and promptly stole our hearts. Somehow this mixed breed miss manages to be cute and elegant all at the same time. Madison is obsessed with cheese sticks and refuses to take a walk if it’s even drizzling the slightest hint of rain.

She is more interested in clothing than anyone else in the family, humans included. In fact, sometimes she will not let you remove an article of clothing that she has on unless you show a different piece of clothing as temptation for her to allow you to change her attire. We call her a princess because, well, she is one. 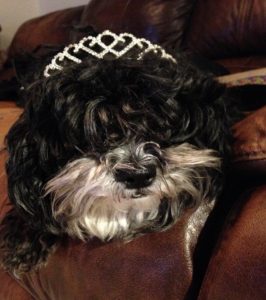 Her brown eyes are quite lovely, although you really can’t see them in this photo.

About 5 ½ years ago I had something suddenly on my mind; how can we keep Madison feeling young? She was healthy, but there had to be more we could do. For some reason I decided that getting a puppy would invigorate her – give her a playmate and motivation to stay young at heart. When I was growing up, we always had multiple dogs, so the prospect was not daunting at all. I clearly remember that the kids had a day off from school for Columbus Day and I took them roller skating. When they were finished, I told him I wanted to stop by a pet place to inquire about the best way to introduce a puppy into a household where there was already another dog. Even though my household had always had multiple dogs when I was young, as a kid I had paid no attention to the details.

On the way home from the roller rink was a pet shop. I wanted to get another dog from a local shelter, but the pet shop seemed a good place to ask questions about the best way to introduce a puppy to an older dog. I spoke to my children very seriously before we stopped. I made sure they understood that although they could play with the dogs they were going to see, we were not getting one. Mom just had some questions to ask about the possibility of us getting one in the near future. And after I asked my question, I was going to take them to lunch. Yeah, we all know how that turned out. 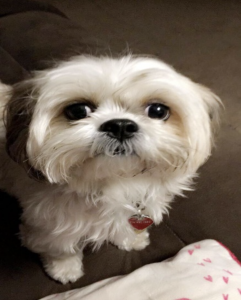 It’s really not my fault I caved. The tiny puppy was irresistible, a bundle of energy and happiness that stood out among other adorable pups. It was impulsive but I just had to have her. The kids named her Samantha Katie because according to their logic, it would be wrong to give her a pet type of name when Madison had a human name. Ok.  She was a bundle of energy and got along with Madison right away. We soon learned that she had a mischievous streak. For the short intervals we would be out of the house, I got her a pet playpen that we would set up to make a fun and comfortable space for her to relax and play with her chew toys. Except every time we used it, when we got home, she was out of it. The door of it would still be secured, and it would be a break, but Samantha would be roaming free. After it happened a couple of times, a  video left running discovered her secret:

Not too many months after that video, I noticed that Samantha’s mouth was ringed in orangey dust. I wondered to myself, what could she have eaten that is orange? “Who gave Sammy cheese doodles?” Denials all around. And then she was throwing up orange tinted matter. “Did someone give her Cheez-its?” Again, firm denials. The kids started looking around and my oldest found a pile of half eaten Advil tablets under a living room chair. They are a dark orange color. With it was a big bottle of the pills, with the cap still secured. The puppy had gnawed a hole through this side of the heavy-duty plastic. Samantha somehow managed to retrieve the big bottle from where, I assume, it must have fallen on the bathroom floor.

I can’t drive, but my Dad was reachable, and he rushed the puppy to the vet. Several hours later the somber veterinarian called to say he was treating Samantha, but the prognosis was not good. Advil was highly toxic for dogs, and she only weighed about 5 pounds. He suggested I prepare myself and my children for the likelihood that she would not survive.  Well, after a 2-week hospital stay, Samantha came home.

Less than 6 months later, Samantha was in another terrible mess. As a result of a complicated series of events, her beautiful fluffy tail got caught in the mechanism of a reclining chair that was part of our living room couch. Years later, in my mind I can still hear her anguished scream. It sounded like that of a human child. She was swiftly freed. Her tail was clearly broken. It was missing a lot of hair and was bloodied. She shook violently as she went into shock.  At that time my father was in the hospital, hurriedly made phone calls to find a friend drive her to the vet. Another 2-week hospital stay. The vet tried to save her tail but there was too much internal damage to it.

Samantha’s personality changed after her frightening near-death experiences. She became more nervous, and far less playful. We love her just the same, of course. But do you remember why we got her? To help keep Madison young … and she no longer did that at all. 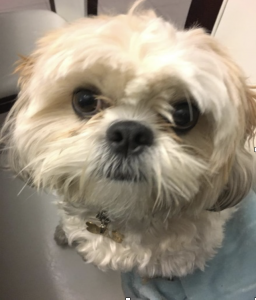 Which is how we ended up with dog number 3. Chloe Isabella will turn 3 on May 1st.  As I already explained, she couldn’t have a dog type name when the others had regular girl names. Chloe is a Shih Tzu-Maltese mix, just like Samantha. Whereas Samantha has the body type of a Maltese, Chloe has the larger body type of a shih tzu.

I have been fortunate enough to have a lot of dogs in my life since I was a little kid. Never have I known one who was so joyous to be a dog, as Chloe. She is constantly playing and cuddling and running around. She never encountered a dog toy that she didn’t love, and she plays with Madison every chance she can. She is the only one of the 3 who actually sits in the doghouse on our deck. 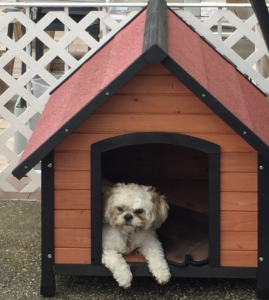 Our dogs have blessed us with a lot of smiles over the years, a lot of frustrations, and a lot of expenses. They have also offered unending support through all kinds of crises, and absorbed countless tears. Please reach out and tell me about your pet family members! 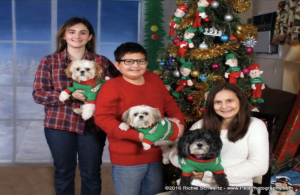 Amanda with Chloe, Nick with Samantha, Sabrina with Madison