According to CDC data, about 13% of Americans have a visible physical disability or mobility impairment of some type. More than 3 million Americans use a wheelchair or motorized mobility device full-time, and many more rely on those part-time. Then there are all the people who use a walker, rollator, cane, or crutches to enable them to walk. Technology has advanced a lot in accessibility devices. I have a motorized powerchair that lets me raise up the seat so I can have face-to-face conversations with people. I don’t get to use it much, but that’s another issue.

What is the largest minority group in the United States? There is a good chance it is not whatever group you are thinking it is.  As of the most recently available census data:

Hispanic and Latino Americans – 16.3% of the population

African Americans – 12.6% of the population

Asian Americans – 4.8% of the population

Native Hawaiians and other Pacific Islanders – 0.2% of the population

LGBTQ+ American Adults – 4.5% of the population

Americans with a Mobility/Functional Disability – 17.4% of the population

These numbers are as accurate as possible. Different statistical sources offer slightly different percentages, but this is the most reliable set of figures as of the date of this writing. So, people with physical functional disabilities are the largest minority group in the US. But if you think about it, when you are out and about, how often do you see people with walkers or crutches or wheelchairs and such?

Disabled people add ways to manage in their homes. They have adaptations and equipment to live day-to-day, including caregivers to help them eat or change clothes, bathe, get into bed, or accomplish whatever else requires assistance. Going out in public presents a whole other world of challenges and obstacles.

Some people own a wheelchair accessible minivan or SUV that is adapted for them to drive, or somebody else to drive. Those vehicles have a ramp that is lowered to allow access into and out of the vehicle.

Accessible mobility vehicles are very expensive. When my husband was alive, he had a rotating mobility seat installed in the front of a large SUV – the seat rotated out of the vehicle and lower to the ground to enable me to transfer to it and be lifted up into the vehicle. He also had a motorized lift arm installed in the trunk, to lift and store the motorized scooter I had at the time.

This video shows you the type of seat to which I refer:

And here is an image of the type of lift we had to raise the scooter into and out of the rear of the SUV: 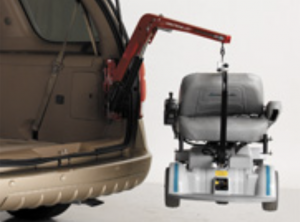 The devices were expensive and to use them I required assistance.  The trauma of losing my husband greatly worsened my disability level, which worsened further after the untimely death of my father in 2016. With both of them gone, I would require the use of an accessible vehicle that I could drive onto. Those vehicles are very expensive. There are some limited grants to help offset the cost acquiring one, but those grants are hard to come by.

Even if you are able to own one, parking and getting out a vehicle that necessitates a ramp extended can be another challenge. Accessible van parking spaces are always in very limited supply. Frequently, people place obstacles like shopping carts, motorcycles, bicycles, cars, trash and so on in the striped areas between spaces that are designed for the deployment of wheelchair ramps. In winter, it is not uncommon to find snow shoveled from a parking lot and dumped into those spaces. I ran into the same problem all the time when we had the vehicle with the seat that turned out of the SUV and came down to the ground. 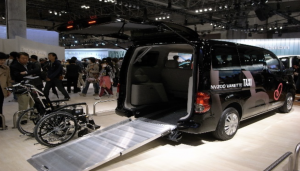 If a wheelchair user doesn’t own a van, as I don’t, transportation options are very limited. Those limits are dictated by available equipment, physical condition, level of disability, logistics, geography and budget. Some disabled people can stand and pivot into a taxi or Uber and have a folding scooter or walker that can go in a trunk. As someone who relies full-time on a power wheelchair for mobility, I can’t just call any taxi. I need a fully accessible taxi, which are very hard to find even in big cities. They are practically impossible to find in small towns.

Public transportation, another option, is a very mixed bag of impossibility and opportunity. I live on Long Island in New York, about a 35-minute train ride from New York City. The Long Island railroad is fairly well accessible at most stations. Once you get into New York City, it is a challenge to find a usable elevator in Penn Station so you can get up to street level. The New York subway system is about 100% useless for wheelchair users. Very few stations have elevators down to the platforms. Of those that do, the elevators are infamous for not working.

NYC and many other large cities do have accessible buses scattered among the regular buses.  Depending on the destination, and availability of accessible transfers, a wheelchair user can spend extra hours on a bus or two to travel only a few miles because of the route layout.  While traveling with my family over the years I have had experiences where accessible transportation was available to a certain point, then suddenly we were stuck because I could not continue on as there were accessible options past a certain point.

Transportation is a huge barrier, but not the only one. After arriving at the destination, we still have to deal with the standard accessibility challenges, like uneven ground surfaces, flat entryways, doorways, accessible bathrooms, functional elevators and so on. Sidewalks are often uneven, or broken, and in some places are nonexistent. Not all sidewalks have ends cut for accessibility, which can necessitate trying to not flip the wheelchair or scooter over when crossing, being forced to go far out of the way, or being forced to retreat back the way you came because you can’t go forward. 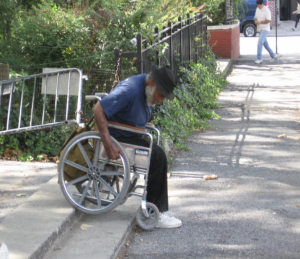 The United States has the benefit of the Americans with Disabilities Act (ADA), which became law in 1990. The ADA is a civil rights law that prohibits discrimination against individuals with disabilities in all areas of public life, including jobs, schools, transportation, and all public and private places that are open to the general public. Some sites are exempted from compliance because they were built before the ADA or are historic structures. About 5 years ago I was at a hotel with my children for an event we were attending. It was in New Jersey, at a hotel run by a well-known chain. The event was in a ballroom on the second floor. The single elevator providing access for anyone who could not climb the stairs, was extremely tiny. My basic, motorized scooter was unable to fit into the elevator. Fortunately, at that point I was able to stand up and take a few steps with a walker. I had to use the Walker to get into the elevator and then lean on the wall for support. Once I got to the second floor, I had to struggle off the elevator and lean on the outside wall by it while my father brought up the scooter in the elevator with it balanced upright on its end against inside the elevator.  When I had made the reservation, I had confirmed that there was an elevator I would be able to use; the reservations desk never mentioned that only a small standard wheelchair could possibly fit in the elevator.

Every choice a disabled person makes involves a cost/benefit analysis. The amount of cost, effort and difficulty to get to a destination has to be balanced against the benefit from being there. Cost itself can be a major issue. Just the ambulette service to and from my daughters Sweet 16 this past summer was $350, plus the cost of extra hours for the necessary aide. It was a major milestone event, so I paid for it and was grateful to be there for at least part of the party. Could I afford to do so for teacher conferences? For school concerts? For dance performances? To go to the mall, or a movie or museum? Unfortunately, no. The ugly reality is that most of the time it’s either too difficult for wheelchair users to simply go somewhere, or the extreme cost and effort required is not affordable.

If you ever find yourself thinking that a disabled person could attend something or go somewhere if they just want badly enough to do it, please know that there are a lot more factors involved than what you likely know.  Be kind, and don’t judge.