St. Patrick’s Day – March 17 – was my husband’s birthday. He was killed on February 27. Just 2 ½ weeks before his birthday. A large, long, rectangular package was delivered to our house about 5 days after the funeral. It was the fancy metal detector I had gotten for him.

Chris used to tell me about when he was a kid, that his mother buried a jewelry box filled with costume jewelry and dirt encrusted coins, somewhere in their backyard. She gave him a hand drawn map that she told him she had found in the wall of their house. He laughed as he told me he had spent days and days hunting for the buried treasure, and how excited he had been when he found it. Chris told me more than once that it was one of his best childhood memories.

At the time of his untimely death, there was bookmarked on my computer several websites where we could get old Roman coins. Chris had tasked me with researching that. You can actually get some of the less desirable of those coins fairly inexpensively, in $10 and $25 grab bags. It’s really amazing when you take into account that the coins purportedly date back to the 2 – 4 century A.D. if you want to see what I’m talking about, you can check some out here: http://www.ancientresource.com/lots/roman/roman_coin_lots.html.

Chris had found some treasure chest style boxes online. He was sketching out a hand drawing of a map and had me get some craft paper that could be rolled up into a scroll. His goal originally was to have this surprise set for the kids by Christmas 2012. But one night while talking about it we realized the ground would be too hard for him to dig and bury the treasure chest.  So, we decided to relax the timeline and the treasure hunt was going to be an activity for Spring 2013. But of course, we never got that far.

Probably derived from that great childhood memory of discovering the treasure chest in his yard. Chris had a very small metal detector that he would occasionally take to the beach and the park with us. It didn’t work very well so he rarely bothered to dig it out of the garage. But since he was working excitedly on planning a treasure hunt for our kids, I got it into my head that a good quality, long-handled metal detector would be a great birthday gift for him. I’m still sure he would have loved it. When it arrived this Saturday after the funeral, I felt like somebody had punched me in the stomach. I had a friend put the box in the back of our garage. It sat there, untouched in in the box, for about 3 years. I finally posted it on a local Facebook page and gave it away to a metal detecting enthusiast.

Although flowers on a grave site is not much of a celebration. There was one year I skipped doing it. I felt ridiculously, absurdly guilty for doing that. I think grave site flowers are for the benefit of the living, not the dead.

My husband detested cemeteries. He adored his mother, Lucille, who died in 2009. Yet he very rarely went to the cemetery. Chris told me her body was there, but she wasn’t there. He was adamant about it. I know he would tell me not to waste money on flowers for him in the cemetery, and he was a guy who gave me flowers at least 10 times a year for nearly 30 years. Birthday roses. Christmas roses. A flower or flowers on the 17th of almost every month. Roses when he proposed. The card in this picture is a little hard to read, but if you look closely, he wrote Dearest Denise, All my love, Your soon to be husband, Chris 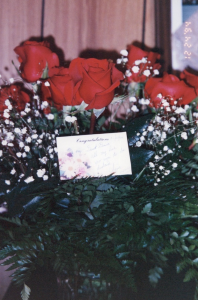 He even sent me red roses on the morning of our wedding, knowing I would only have the enjoyment of them for a few hours before leaving for the church. So, I know he was not averse to wasting money on flowers. Yet I am quite sure what he would say about sending flowers to the cemetery for him.

Ironically, I think, although I have flowers delivered there for pretty much every holiday, my disability has only allowed me to visit in person 4 times in 7 years. It is a fact that makes me feel horrible.

I am not an intensely religious person. I was not raised with the habit of visiting cemeteries. My husband loathed them, and I’m confident he would tell me that it is ridiculous for me to feel this way.  But that doesn’t change the fact that I do.

Is it better to mark the day of a person’s birth, or the date of their death? These momentous events are the bookends of our lives.

I have tried to have the attitude that the date of his death should be celebrated as the day he went home to God. Sadly, I do not have the strength of character or sufficiently strong enough faith to manage to achieve that level of enlightenment. Cards like this are beautiful and way beyond my maturity level. It would seem that it could only be a meme because you cannot actually send a card to a dead person. But I have seen cards like this over the years in the local Hallmark or other card stores. I assume people buy them for funerals or for memorial services or to leave at cemeteries. They must make some people feel better. I just get agitated. 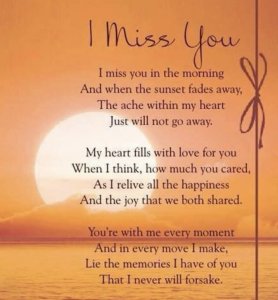 I have read exhaustively on the subject of loss. Thought about it from countless angles. Prayed. Meditated.  Spoke to a couple of people I respect who have had near death experiences. The best conclusion I could come to is that death is either a wall where everything just ends, or a door to another dimension. It could actually be both. Perhaps for some people it is the wall where it all just ends, and some others move on to an afterlife or another life.

Chris’ life was a gift that blessed me and our children, and many others for whom he did anonymous good works. It deserves to be remembered and somehow celebrated. I think I have come to the conclusion that the anniversary of the day he was killed should also  celebrated, or memorialized, because it can potentially encourage other people to not drive under the influence and potentially kill an innocent person like Chris.

I remember the date of death of both my parents, and birth dates of course. Other people who have died, who were important to me, I find I remember only their dates of birth. Is that something you also experience? Is it the mind’s subtle indicator that we should commemorate birthdays not dates of death? Please let me know what you think about it. 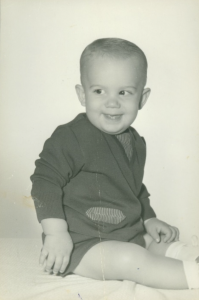 3 thoughts on “His birthday still hurts.”