Being disabled is frequently infuriating. It has stolen my ability to walk, to dance, to play golf. I can’t just go where I want and do what I want. When I want an iced coffee from Dunkin’ Donuts someone else has to get it for me. Want to see my son play in the orchestra at school? I have to hope somebody videotapes it for me on their phone. Teacher conferences have to be telephone conferences.

I can’t go out for a glass of wine with friends on a Friday night. No brunch with my daughters on Sunday at a favorite restaurant. I can’t hop on a plane and attend a genealogical conference somewhere so I could build great connections and learn things to hone my skills. I can’t go to book conventions to meet authors I admire and other fans of recreational reading. I can’t just go cheer at a baseball game, or a hockey game, or enjoy great seats at a concert. I can’t visit any of my favorite museums, see a Broadway show, or any of a thousand other things I’d like to do.

It is frustrating. And disappointing. Frequently devastating.

Now I know some people will read that and say if I want to go to any of the above, I should just do it. Just make it happen. I will post in the next couple of weeks a thorough explanation of why it is so difficult to just make it happen.

“If you put your mind to it you could figure out a way.” Disabled people are told that a lot, and its part of why it’s usually not easy for people to talk about their physical, psychological or emotional disabilities. Society sees people who have disabilities as being intrinsically flawed. Weak. Lacking.

There are a lot of emotional disabilities that can affect someone. Some armed forces veterans who must deal with PTSD (post-traumatic stress disorder), after tours of duty, do not want to acknowledge it. They try to hide that they are affected that way, as if it were something about which to be embarrassed. It is not.

People suffering from depression often do not want anybody to know about it and go to great lengths to hide it. Yet depression is the most common mental disorder in the world.

Those who suffer from OCD (obsessive compulsive disorder) will also put forth great effort to hide the fact, as do people who suffer from anorexia or bulimia, panic attacks or social anxiety disorders. Society expects “Normal” and falling outside the tacit definition of “Normal” is truly tough.

Millions of people in the U.S. are affected by mental conditions every year. It’s important to measure how common these are, so we can understand the physical, social and financial impact — and so we can show that no one is alone in dealing with them. These numbers are also powerful tools for raising public awareness, stigma-busting and advocating for better health care nationwide. 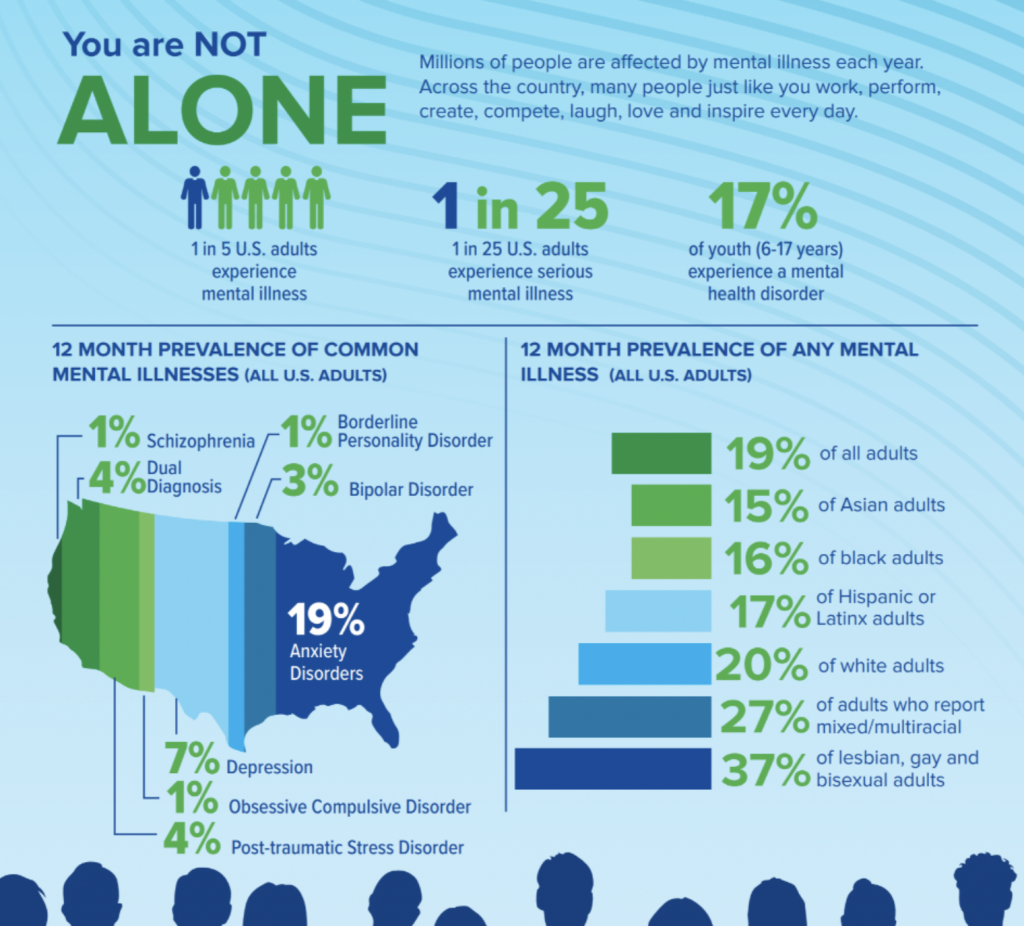 This infographic from the National Alliance on Mental Illness (NAMI) visually demonstrates how very common these conditions really are. Please really look at that graphic. It would take a lot of words to describe exactly what it shows.

The key takeaway is the very first item illustrated at the top of the graphic. 1 in 5 adults in the United States experience some kind of mental illness. That includes everyone’s family and everyone’s friends. 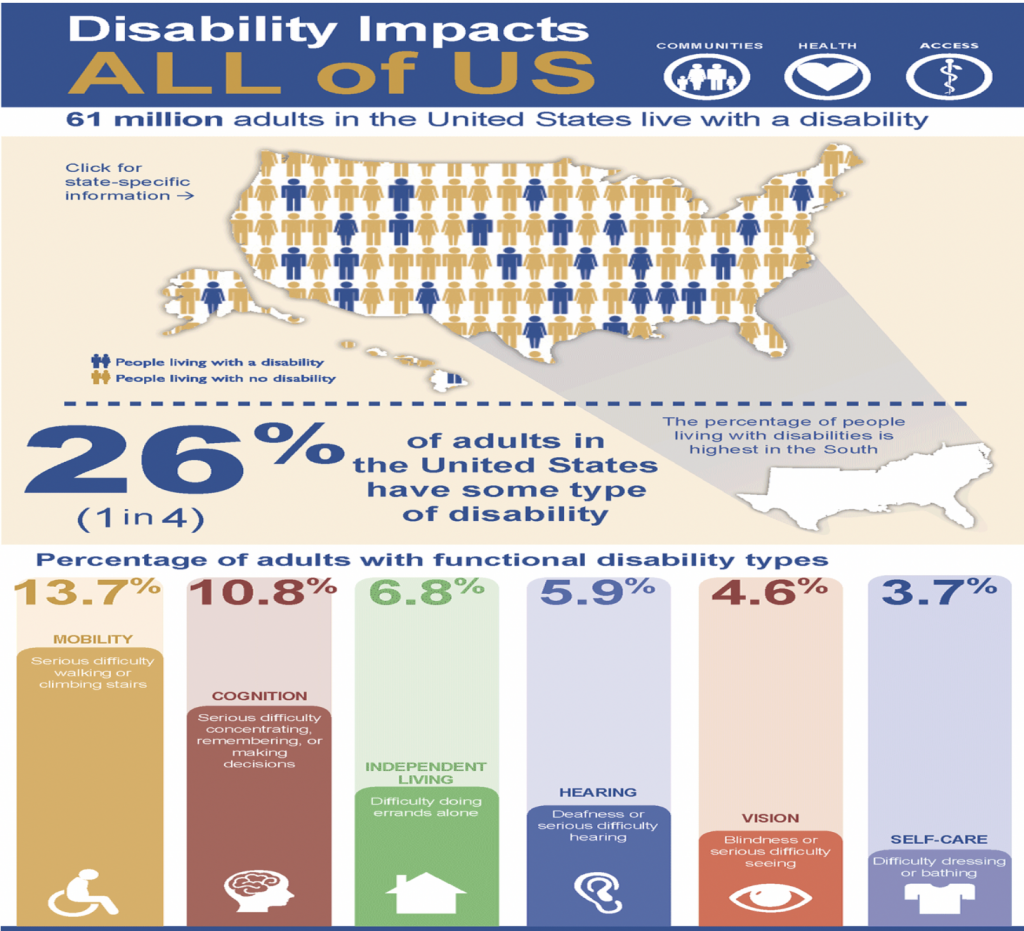 The infographic above is part of one created by the Center for Disease Control and Prevention (CDC). According to government statistics, as shown on the top of the chart, 26% of adults in the United States have some type of disability. Of those, 45.5% are disabilities that in some way impair function. Within that subset, 13.7% have a mobility disability, which is described as “serious difficulty walking or climbing stairs”.

That would be me. Although walking is more than a “serious difficulty” for me. It’s an impossibility. According to the CDC, in 2018, the percent of adults unable (or finding it very difficult) to walk a quarter mile: 7.8%. It’s not a huge number as compared to the general population of the United States.

Stop perceiving people with disabilities as Less. Despite the legal protections that are in place, disabled people still face discrimination in schools, by employers, by potential employers, and in a lot of social situations.

This summer, I will be finishing my master’s degree through the rigorous distance learning program at Georgetown University. Colleagues in this program are extraordinary, highly motivated individuals across the United States and scattered around the world. None of them know I am pretty much homebound, complete with hospital bed, motorized wheelchair, lift, and assorted other accommodations. No one knows I have to type everything on a tablet with my left hand (I used to be right-handed). I wish to be judged on my thoughts, work and contributions. And so, do most other people with disabilities.

2 thoughts on “My disability does not make me ‘Less’”